I like the look of the Falcon Heavy and Atlas 500, so I have decided build something similar.

This will definitely not be a scale model, but instead something influenced by those rockets. Well at least influenced to the extent that the nose cone will be fatter than the body tube and it will have 2 boosters.

This version is a proof of concept and will have a single 24mm motor mount (in the body tube). If it works well there is potential to upscale the tube sizes and add motors to the boosters.

The 3 tubes of the rocket will be held together by fore and aft 3D printed brackets.

Below is a sketch of the rear bracket. The hole is the centre will take the motor mount tube. The square notches are designed to help locate the fins (possibly made from clear acrylic). The round holes in the bottom of the outer sections are to take dummy rocket engines (for show only). 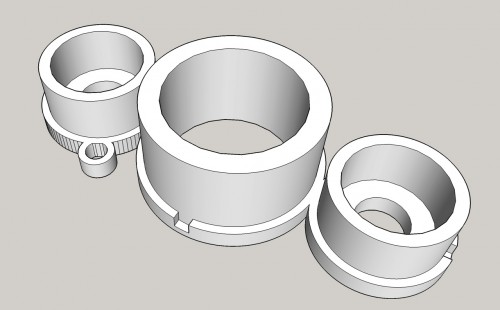 Below is a sketch of the front bracket. Similar design to the rear one except it will slide over the body tube (rather than going inside the body tube). The holes in the outer sections are to take booster nose cones. 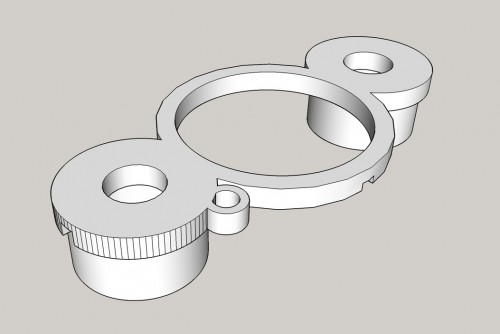 A sketch of a dummy engine. The cylinder at the top fits into the outer holes of the rear bracket. 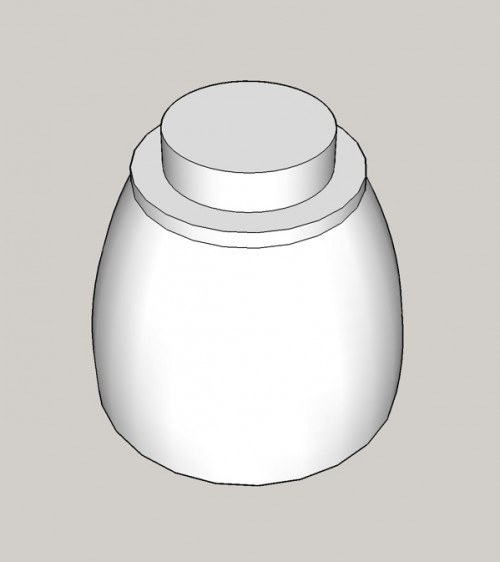 Engine from another angle. 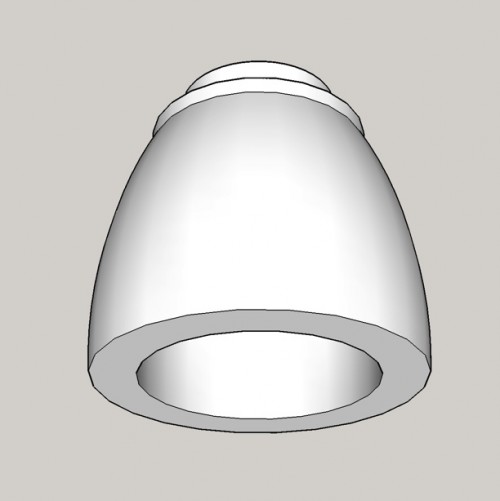 Booster nose cone. The cylinder at the bottom fits into the outer holes of the forward bracket. 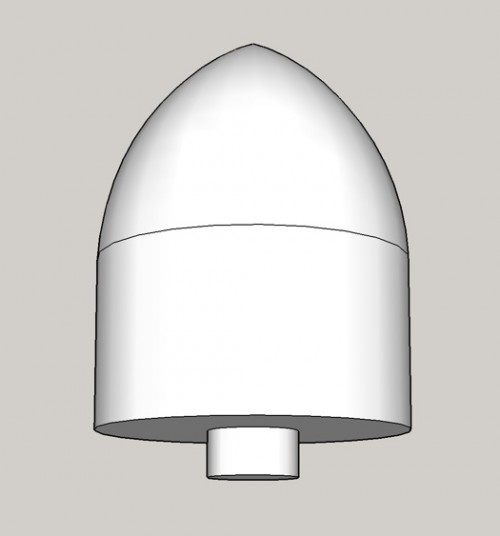 I could have designed the fore and aft brackets complete with engines or nose cones and printed it all together, but I think breaking it down into components will make the prints easier to manage. Plus the parts could be swapped out if I want to change them.

I have a spare nose cone from an old kit for the main body tube, so I won't be printing that.

All the components have been designed in the free version of SketchUp. Everything will be printed on a cheap Aldi printer. Its sold as the Cocoon Create Model Maker in Australia, but its actually a Wanhao i3 Mini.

Now time to warm up that printer.

Looking forward to see how this progresses.

Looking forward to see how this progresses.

Thanks Joe. It's a fun learning process.
Top

I made a little progress with prototype prints.

There were a lot of failed prints, but once I dialed in the tolerances and fixed some bed adhesion issues it went well.

These things are quite small and the filament is black, so hard to photograph well. 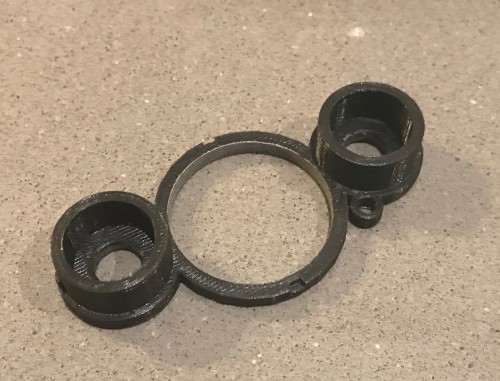 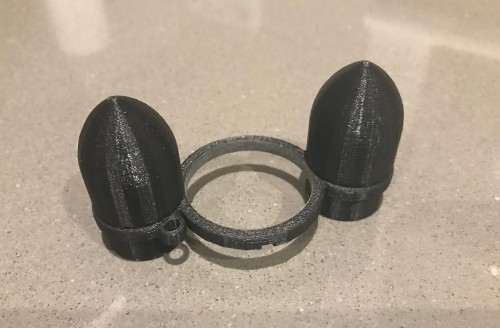 I originally made much bigger dummy engines, but I was a little concerned they might get cooked by the motor in the middle. So these look a little small, but hopefully won't get melted.

Next step assembly with tubes.
Top


I've been madly 3-D printing (for my own project) and one of my requirements was to have the parts sanded to almost a polish finish.

I assume you would like to get a nice smooth finish for the visible components (exterior surfaces)? If so, I've shared my experiences below might help.

This worked very well for me and might work well for you.

I apply a layer of cyanoacrylate glue and then sand. This is repeated a couple of times till I get the finish I want. I hate sanding so I usually only do two applications. I think it is quicker than just sanding. Loctite 401 is the glue of choice. I use ABS for the prints.
TRA #13430
L3
"Everybody's simulation model is guilty until proven innocent" (Thomas H. Lawrence 1994)
Top

Thanks Joe and Over The Top. Good tips.

I have few different 3d printed projects happening at the moment, including printing tiny little Micro Maxx rockets through to components for my next high power build.

So far I have just been printing with PLA filament, mainly because the printer came with 6 spools of PLA!

I understand that acetone smoothing doesn't work with PLA, so that's not an option.

Not sure if I will spend a lot of time sanding these components or not. Its really just a proof of concept at this stage. If it works I will upscale it then concentrate more on the finish for the next version.
Top

I have made a bit of progress with this project.

All the rear end is now glued together. It was a nice tight fit. 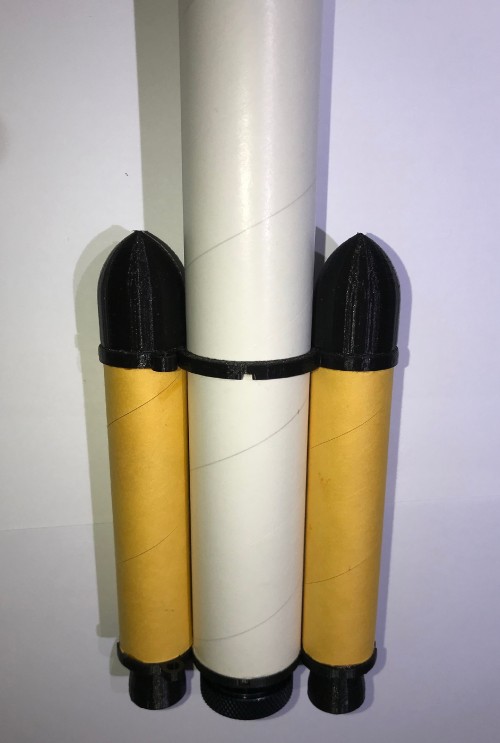 The rear is a bit heavier than I hoped, but I will add a little weight in the nose cone to balance.

I'm not too worried about the final weight as it will be fine for a D or E motor. 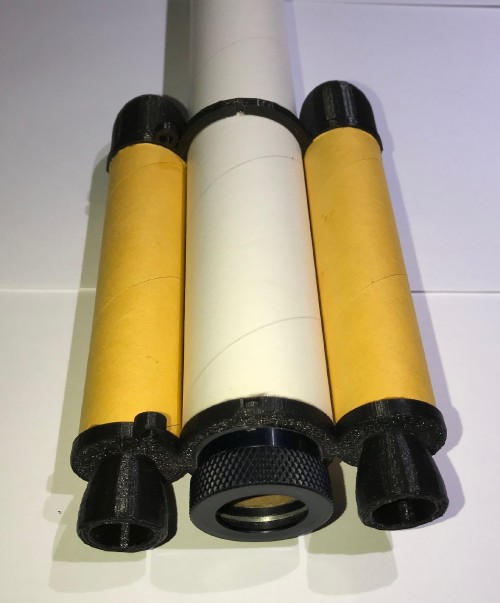 Some of you may recognise the orange tubes as Estes engine block spacers. I always keep them, but until now didn't have a use for them.

The nose cone came from an old payloader or egglofter kit. Not sure which one.

So the next job is fins. Still undecided whether to go for the minimalist look with acrylic or something funky like carbon over balsa.
Top

SpaceManMat wrote:Coming together nicely, I’m going to have to get into some CAD myself.

It certainly adds a fun new dimension to rocket projects.

Worth having a look at some free somewhere like Sketchup, before you spend money on fancy CAD software.

Loads on free courses and tutorials online, but I will warn you it can become quite time consuming......but in a fun way.
Top

Its been a while so I thought i should post an update.

To cut a long story short.....once assembled the rear end of this rocket is quite heavy. The CG is way back behind the booster nose cones.

I wanted to add clear acrylic fins, for that minimalist look, but the weight of the acrylic is just too much. So instead I am making some carbon/balsa fins and adding weight to the nose cone.

This will dramatically change the look of the rocket, but hopefully it will still look good.

When I upscale it I will make a couple of changes:
- Print the 3d printed parts with less infill to make them lighter.
- Double the length of the body tube.

Users browsing this forum: No registered users and 9 guests