Love it when a build comes to life! Great stuff!
Top

Nicely done, now you can paint it

CATO wrote:Nicely done, now you can paint it

Need to finish building it first.


Just checking the sim from Sunday

With the lighter motor the stability was a bit higher than I planned. You might also notice that the base drag (simulated via the cone) is drawing the CP back considerably. If I removed it the stability is less than 1 so I'm fairly confident that base drag is having an impact. For the next flight I think I'll aim for a 1.1 - 1.2 stability margin.

I started building the X Wing engines last night, but have run into some concerns.

The engine basically consists of two tubes, a larger one at the front and a smaller one that comes out the back. The smaller tube is also the motor mount. Ive included dividers to give it the correct appearance and add a bit of bracing. These are made from matchsticks. 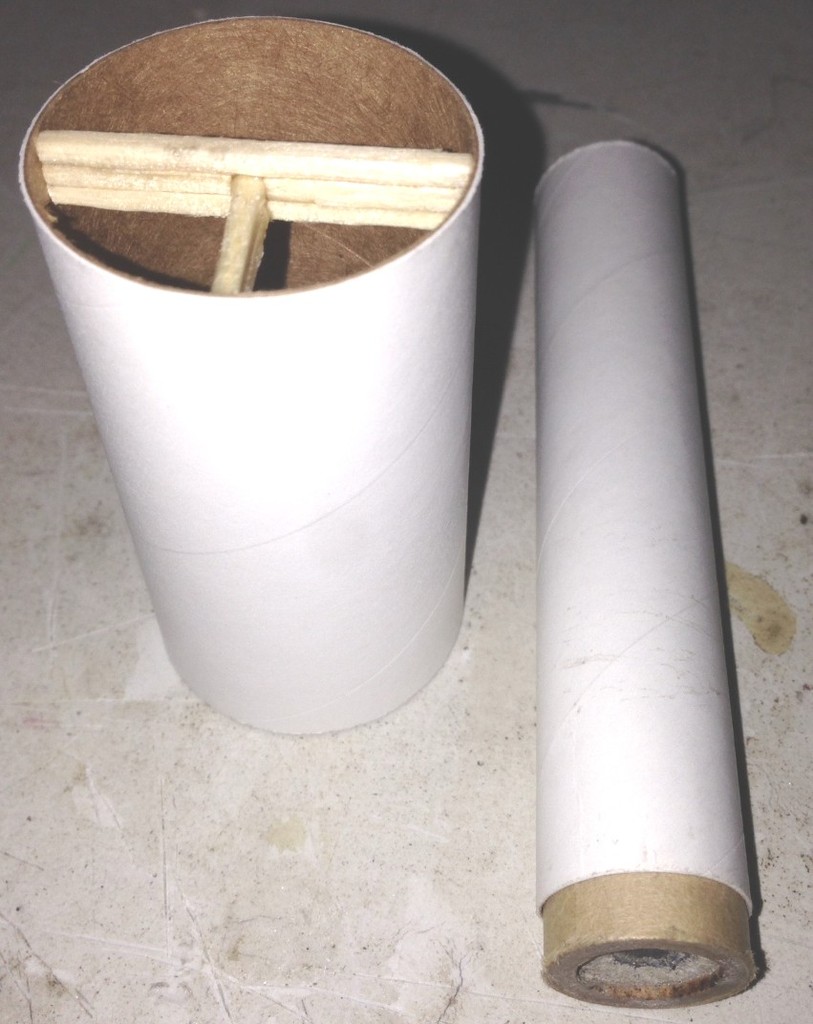 Problem is these sit about 3 cm in front of the motor and are in direct line of fire when the ejection charge goes off. 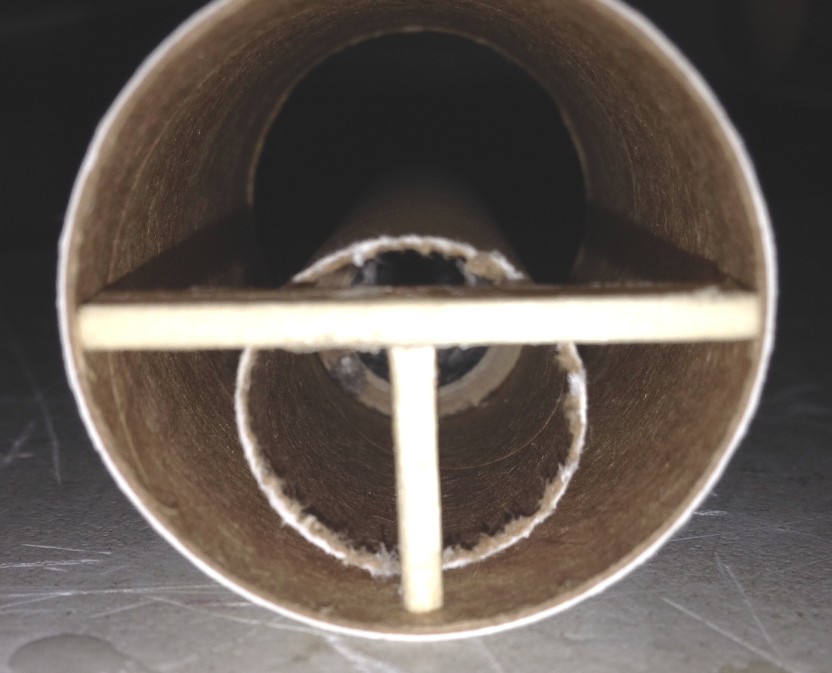 fire when the ejection charge goes off

They are 'match sticks' after all.

fire when the ejection charge goes off

They are 'match sticks' after all.

I was careful to remove that bit of the match but would make for a rather spectaular engine flame out...

That is an option, but a few issues:
1. I think it would have a tendency to spit out the motor unless I used a retainer (which is really not an option)
2. The ejection charge will have the effect of making the X Wing look like it performing an attack, so really want it in there.


My thought was I could use a piece of metal, but no idea what would be the right shape. The other idea I had was 2 small peice of fibre glass, but I think it will be pretty dificult to put together. Looking for some alternative ideas.
QRS: 124
AMRS: 32 L2 RSO
Highest Altitude: 13,647 feet
Fastest Flight: Mach 1.55
Largest Motor: CTI 1115J530 IM
Current Project: X Wing
Top

If anyone is interested I have scans of the exterior panels: front, mid, canopy and nose.
Unfortunately they are too large to attach, send me a PM and I will happily provide a copy.
QRS: 124
AMRS: 32 L2 RSO
Highest Altitude: 13,647 feet
Fastest Flight: Mach 1.55
Largest Motor: CTI 1115J530 IM
Current Project: X Wing
Top

Put together one of the X Wing engines using fibreglass for the inlet. Decided a static test was in order as I need to know that parts of the inlet will not be ejected which is of course a safety violation.

Took some video of the test.


I also captured this shot of the ejection charge going off

Going to look awesome with 4 of these going off in flight. 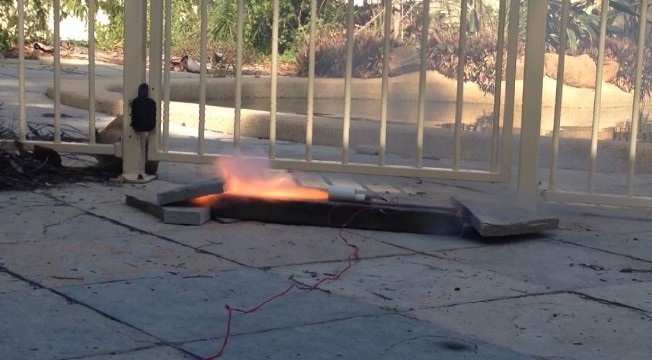 I've made 4 engines and painted the internals black. If anyone has recommendations or tips about painting inside extremely small places please do share, it was quite messy. My tips are to use proper painters tape (as usual) on the outside, also I found a disposable glove quite a good move for keeping my hand paint free.

I used Lego as a spacer between the body and engine while epoxy was drying. 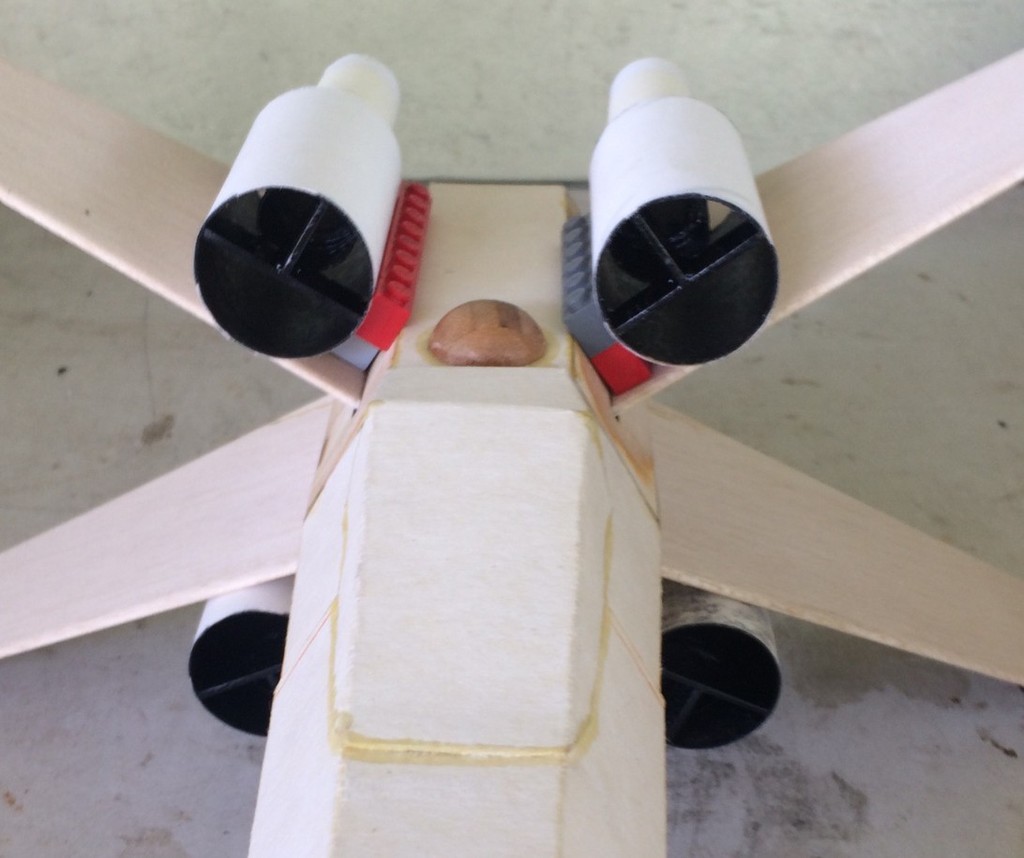 Also I'm looking for a good spray on wood grain filler / sealer if anyone knows of one. Tried "Polyfilla interior small cracks spray filler" from Bunnings and it was terrible - went on all spotty, fell off when I tried to clean it up with sandpaper. The end result could be best described and chalk dust glued on with water

Added the cannons. Grabbed these for free on Australia Day from Bunnings. The larger tube is from the flags they give away and the smaller is from their balloons. As you can tell they will bend when it lands so I've made them replaceable. I'm a little concerned the smaller diameter tube is two soft, perhaps I can reinforce this with a barbecue skewer? Unfortunately I've thrown away mine from Straya Day... 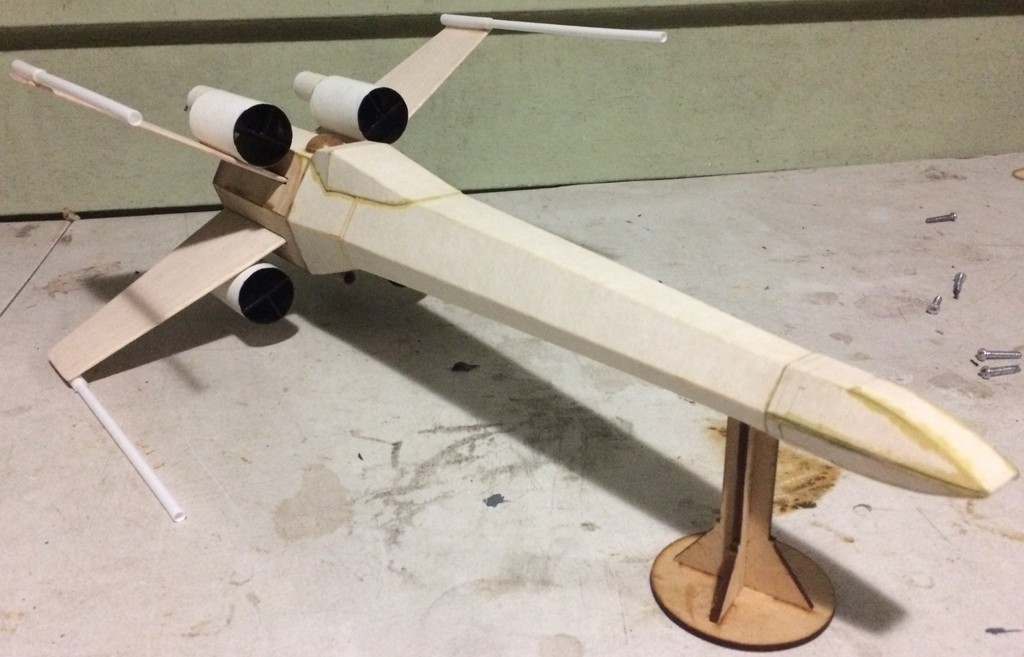 Another shot of the business end. 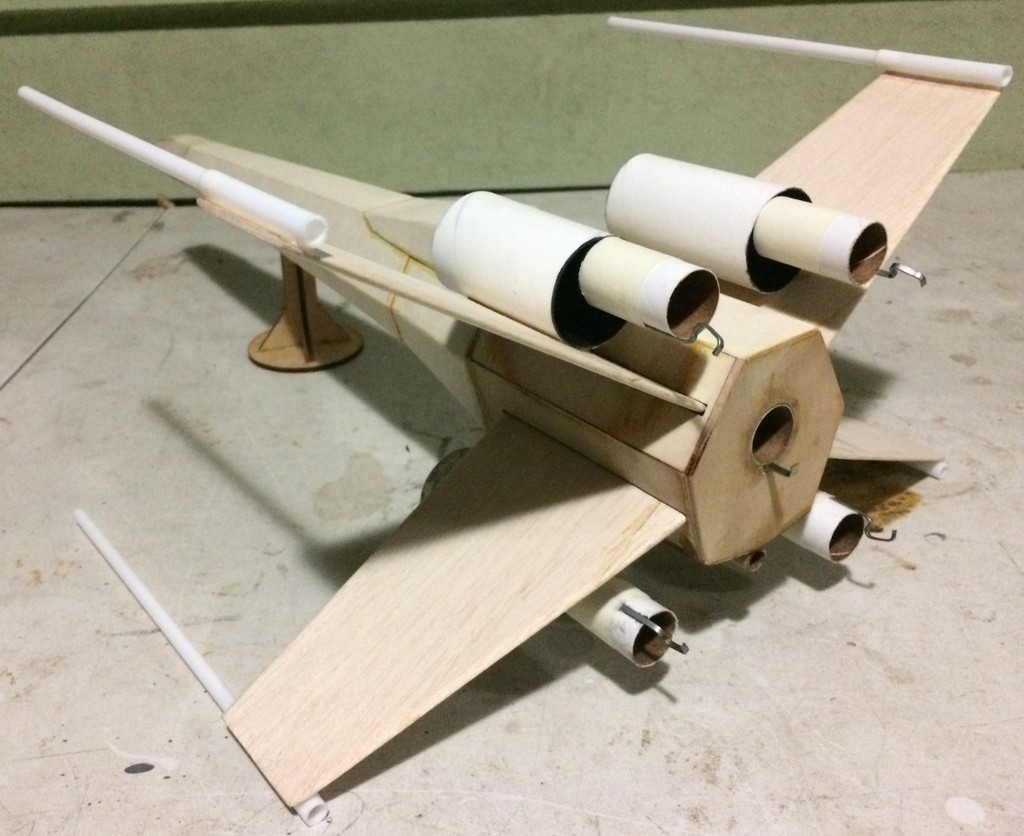 Lot of work done filling joins and prepping for painting. The shapes are pretty complex unlike most rockets and the gap between the engines and body particularly makes thing complicated. One issue I have had is the fibers in the cardboard sticking out. I found that 800 grit sandpaper is really good for de-furring especially after a layer of paint is applied. 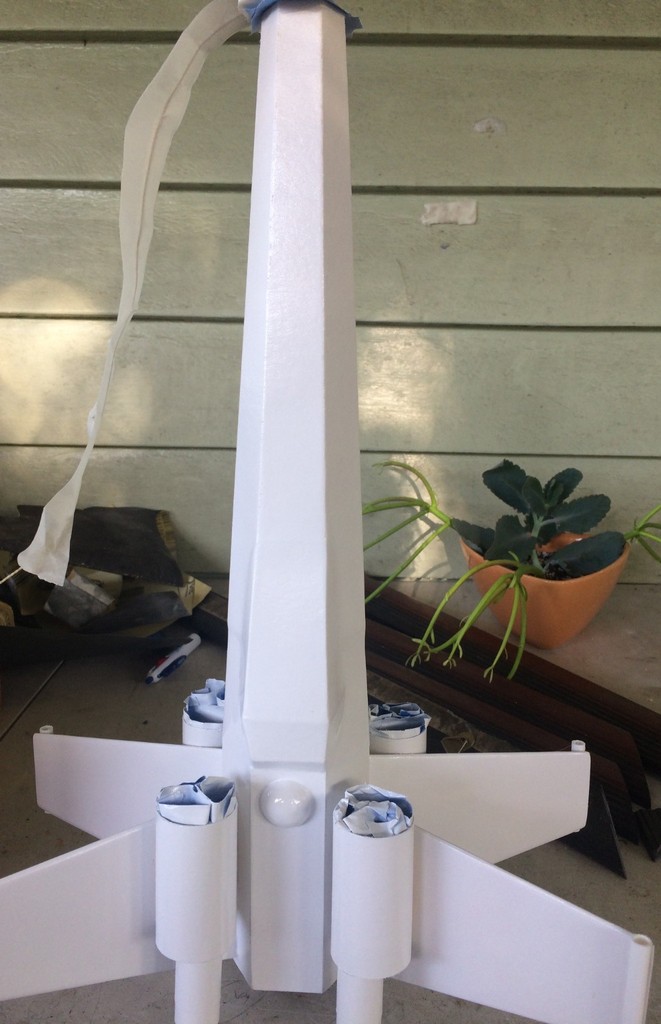 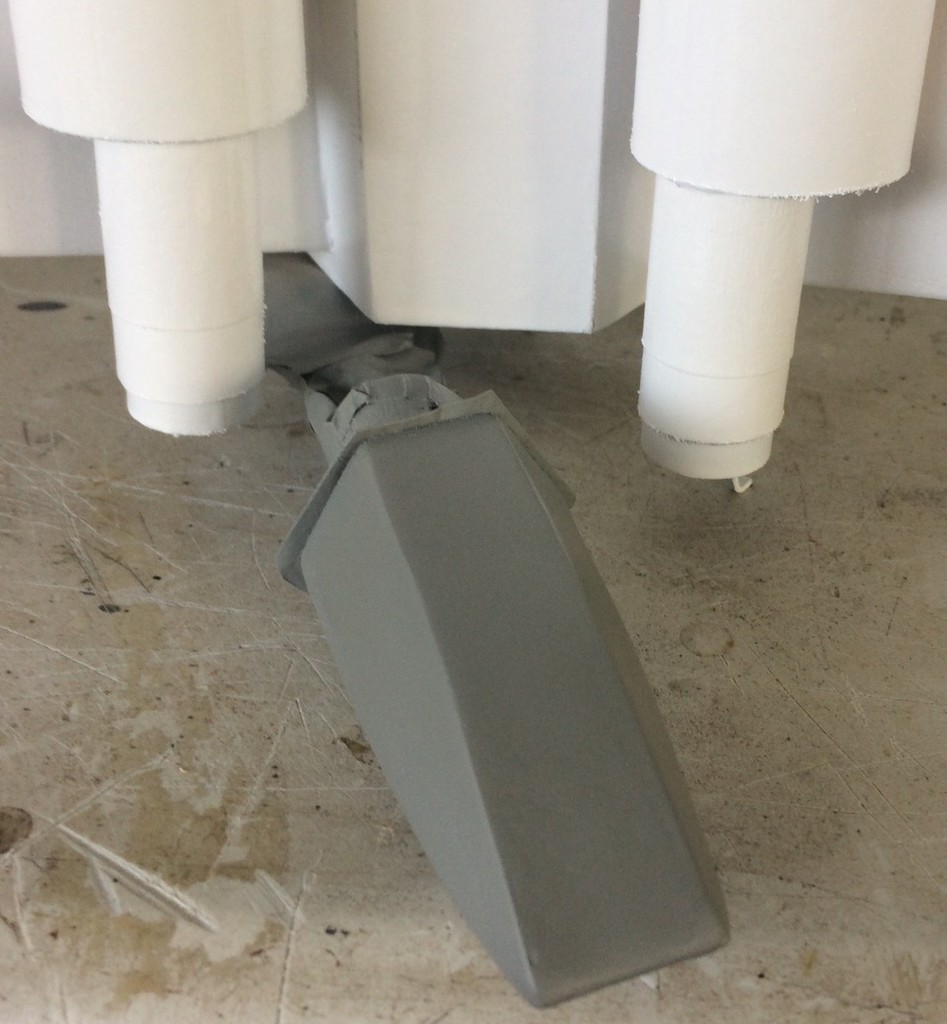 Do you think the cannon tubes are likely to put a twisting force on the fins when the rocket is at speed? That may not be such a bad thing, it may look like the X wing is in a dog-fight.
Crop Circles: ... just a bunch of guys looking for their rockets ....
Top

Do you think the cannon tubes are likely to put a twisting force on the fins when the rocket is at speed? That may not be such a bad thing, it may look like the X wing is in a dog-fight.

They are quite soft, I'm thinking they will in the very least oscillate badly in a 300km wind. Possibly they will bend severely and even rip off and damaging the wing. Another potential concern is they might induce fin flutter from both the force they apply but also from wash onto the fin. I have some wooden skewers that I will definitely need to use to reinforce them and shorten slightly. Possibly I can make them smaller at the tip so they are more aerodynamic. I think this will minimise potential issues. I'll keep looking at it especially to see how it may respond to forces at the tip.