Well I took advantage of the Australian Rocketry end of financial year sale and picked myself up; among other things; a length of BT70 tube and a quad 18mm to BT70 tilted motor mount kit. I had a lot of fun building 'Bucksho7', and thought I might like to build another cluster but something a bit more unique.

So, what to build.... I had no idea so was just going to set this aside for a while but then I came across a YouTube video of the launch abort system for the Orion SLS being tested and fell in love. What a beautiful piece of engineering that is and what better rocket to build a scale model of, not only am I going to vector the thrust, but I’m going to install the motors half way up the airframe and I’m not even going to put fins on it.

Obviously my first concern with the forward mounted thrust and 'finless' design is safety and stability. I played around for hours on end in open rocket and finally came up with a design that actually shows 1.28 Cal of stability. The size of the cone on the aft end made a HUGE difference to the CP so I mucked about till I found a happy margin. I'm not aware of any way to vector thrust in open rocket so I’ve had to sim it with a parallel cluster, I figure it should be fairly accurate, just less altitude then simmed (I decided to do away with the crew module and just have the LAS itself):

Tricky bit first, how am I going to make a strong but light cone accurately, then I had the thought to use a plastic funnel:

I managed to find one the exact diameter of my simulation which was convenient. First order of business was to remove the rim and hang tab:

Next problem was how do I get the airframe perfectly square to the cone to mark it and cut it down? This is not a construction technique I've had to do before so I tried as best I could with what I had to get the job done. If anyone has a better technique I'd love to hear it for next time. Firstly, I placed a small pad on my workbench and shimmed it up so it was perfectly level in both directions, then confirmed diagonally(pictured):

I then sat the funnel on the pad and hung a plumb bob from a rafter above bench. I placed the airframe on the funnel and aligned its length to the string and marked where tube met funnel. I then rotated the cone gently 90' and repeated the process and traced around base of airframe:

Next was cutting the funnel down to length and roughing it up for bonding and painting:

Knowing bonding plastics can be a right pain in the a$$ I went to the trouble of googling the manufacturer of the funnel to find out it was made of poly ethylene, with this knowledge I could then source the correct glue. I found a suitable product on the Loctite website and ordered some in:

Success! that is a damn strong bond, I had a good yank on it to ensure its safe to fly and it might as well be one piece of material:

Next step was to cut a circle of card and plug the opening in base of airframe (inserted from top and bonded with same glue):

Next, I marked and cut out the motor mount slots in airframe with the supplied template:

I also had to notch out the coupler tube bit by bit until it was a perfect fit, obviously there was no template for this bit as I'm not using the kit for its intended purpose:

Now for a test fit, alright I'm getting excited!

Bottom half of airframe in position:

Reinforcing of MMT with epoxy and install my shock cord while I can still get to it:

Time to start filling all the gaps, and believe me there's plenty!

After sanding back all the plaster putty it was time to move onto filleting:

After a lot more sanding, coming along:

Next, I made some brass launch lugs, they were so beautiful it was almost a shame to scuff them up to paint over them. I had to wait till this stage for lower lug as it had to be drilled through the completed fillet on the cone:

Next up I hit the whole rocket with a light coat of auto body filler to take out any minor imperfections with fillets and fill the body tube spirals in both airframe and exposed motor mounts:

This was rubbed right back and then several coats of white paint applied:

So happy with my fillets, I really took my time with them and I think it's some of my finest work yet:

Next up was the nose cone. I had no idea when I ordered the motor mount kit that BT70 nose cones were the stuff of urban legend and could not actually be found anywhere. I eventually came across Semroc products in America that CNC mill balsa nose cones, they had a pattern for a BT70 one that covered the command module of the Apollo and looks almost identical to the one on the real LAS so I ordered one and waited some weeks for it to arrive. Here is how it looked when I opened it:

I've not worked with balsa nose cones before and had to figure out how to seal and sand this thing for painting. Paper laminating like fins didn’t seem like a viable idea so I set to googling and found an Apogee Peak of Flight newsletter article on hardening / sealing balsa nose cones. Basically, it involves coating the cone in ultra-thin CA and sanding it down then repeating the process a few times until you get a smooth hard shell on the surface. I went to my local hobby store and picked up some ultra-thin CA and instant setting spray to help me out:

If anyone tries this technique may I suggest you DO IT OUTSIDE. As soon as I applied the CA to the bare balsa there was a very thick plume of white smoke pouring off that could easily glue your eyes shut or render you unconscious if you had your head over the work piece. (I'm fortunate I was at arm’s length anyway because I hate the smell of CA. Here’s how it looked after the initial coating:

I then coated it in a white felt pen so I could identify the low spots as I sanded it back:

After 3 goes the hardening / sealing process was finished followed by a few coats of white paint:

While all that was drying I set to making some water slide decals to represent the 8 attitude control nozzles and the 4 jettison motor nozzles (my 4 real motors will represent the main abort motor's 4 reverse flow nozzles). I simply drew a dot inside a circle for the smaller nozzles and photographed the back of a teaspoon for the larger nozzles:

One faithful reproduction of the Launch Abort System ready to go!

I plan to fly it on 4 C6-5's from a greater distance than usual and just prey to the rocket gods all 4 motors ignite lol.
"There are very few personal problems that cannot be solved through a suitable application of high explosives"— Scott Adams

Awesome build, the take off will be something else. Some really nice ideas used to make it all happen, but I think teaspoon-photo-decal-nozzles might be my favourite!
- Ben

Thanks guys. Yes plan to put it up at our August launch

Digit wrote:I plan to fly it on 4 C6-5's from a greater distance than usual and just prey to the rocket gods all 4 motors ignite lol.

Get your 4 igniters, check them with a multimeter, then solder them in parallel. Probably you want to do them in 2 sets - a right pair and a left pair and then use some decent wire to join the pairs. The SRC igniters are very reliable so you should be fine.
QRS: 124
AMRS: 32 L2 RSO
Highest Altitude: 13,647 feet
Fastest Flight: Mach 1.55
Largest Motor: CTI 1115J530 IM
Current Project: X Wing
Top

SpaceManMat wrote:Get your 4 igniters, check them with a multimeter, then solder them in parallel. Probably you want to do them in 2 sets - a right pair and a left pair and then use some decent wire to join the pairs. The SRC igniters are very reliable so you should be fine.

Thanks for the idea Mat! No voltage drop there lol.

Looking forward to this one!!

Question: will the thrust from the motors diverge enough to damage the lower body?
Could you protect it with some AL foil or similar?
QRS #184
AMRS #134 L2 RSO / LCO
Top

Good question and one I considered myself earlier on. As much as I like my rockets to proudly wear evidence of their flight I don't want to burn a hole straight through the airframe. I do have Al-foil backed Mylar tape but I didn't want multicolored stuff allover the rocket that wasn't true to the real one, and i also considered making long epoxy strips under each motor but I don't think it should be an issue just looking at this dowel.

Well I'm thinking your engines are perhaps a bit close, based on this testing I did. 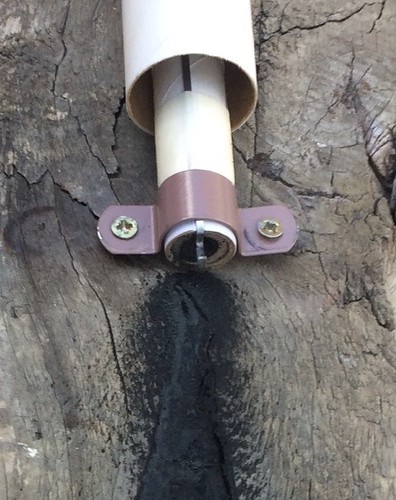 While your rocket should do a lot better then my piece of wood, I still think you'll have some splatter. Perhaps you should at least consider wrapping a price of cardboard around it and doing a static test with a single motor?
QRS: 124
AMRS: 32 L2 RSO
Highest Altitude: 13,647 feet
Fastest Flight: Mach 1.55
Largest Motor: CTI 1115J530 IM
Current Project: X Wing
Top

Is that motor on a flat piece of wood? There is probably a little dead area of air that recirculates just below the saddle and the back end of the motor. I think that is what has caused the charring.

You will find a bit of an angle on the motor and with the rounded airframe and ends of the motors facing away from the airframe there should be suitable air dragged in from above to fill that space with cooler air. Add some forward motion and the problem is reduced further.

It is not my rocket, but if it were I would consider a more realistic test, or if that was too much work to put together for me I would probably just fly it. I haven't put the work in though. YMMV

Users browsing this forum: No registered users and 6 guests