As mentioned up thread I had some interesting damage on my CTI Pro54 Tailcone. I had flown it with a MD rocket previously on a K300 and it looked like new after that flight. Well this flight, not so much. 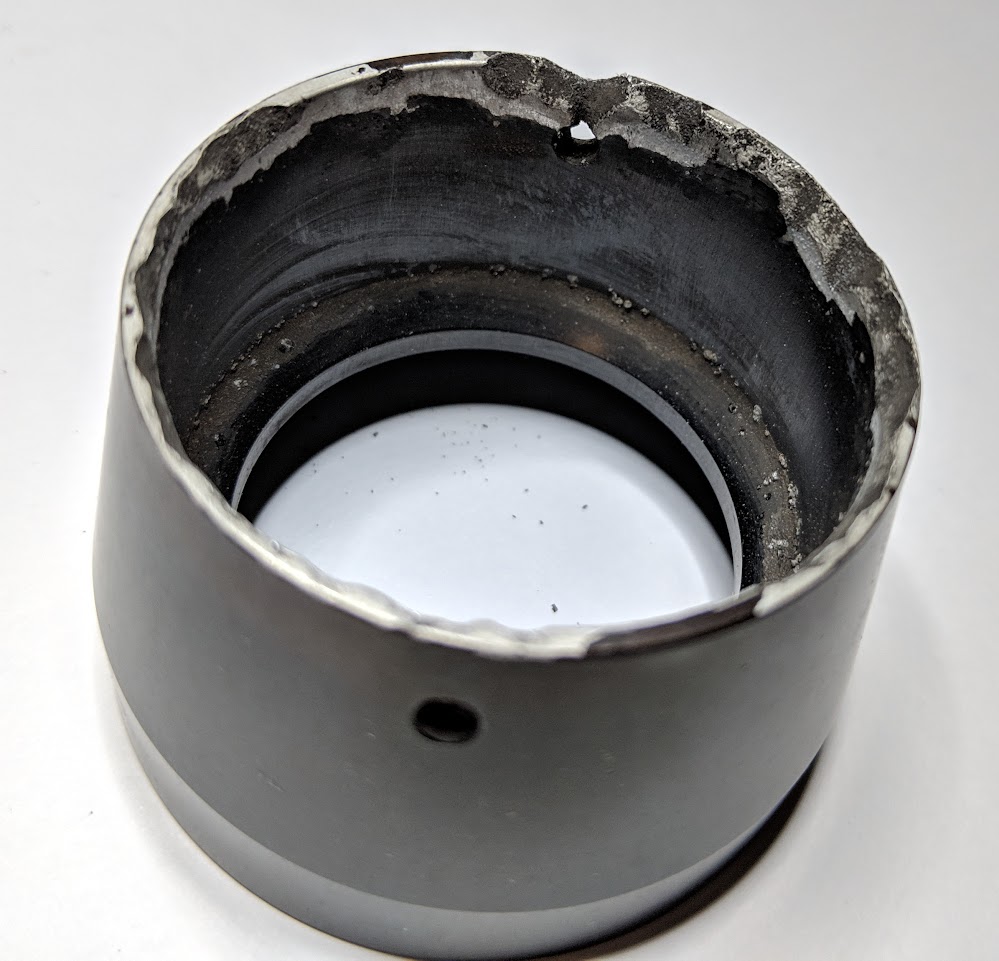 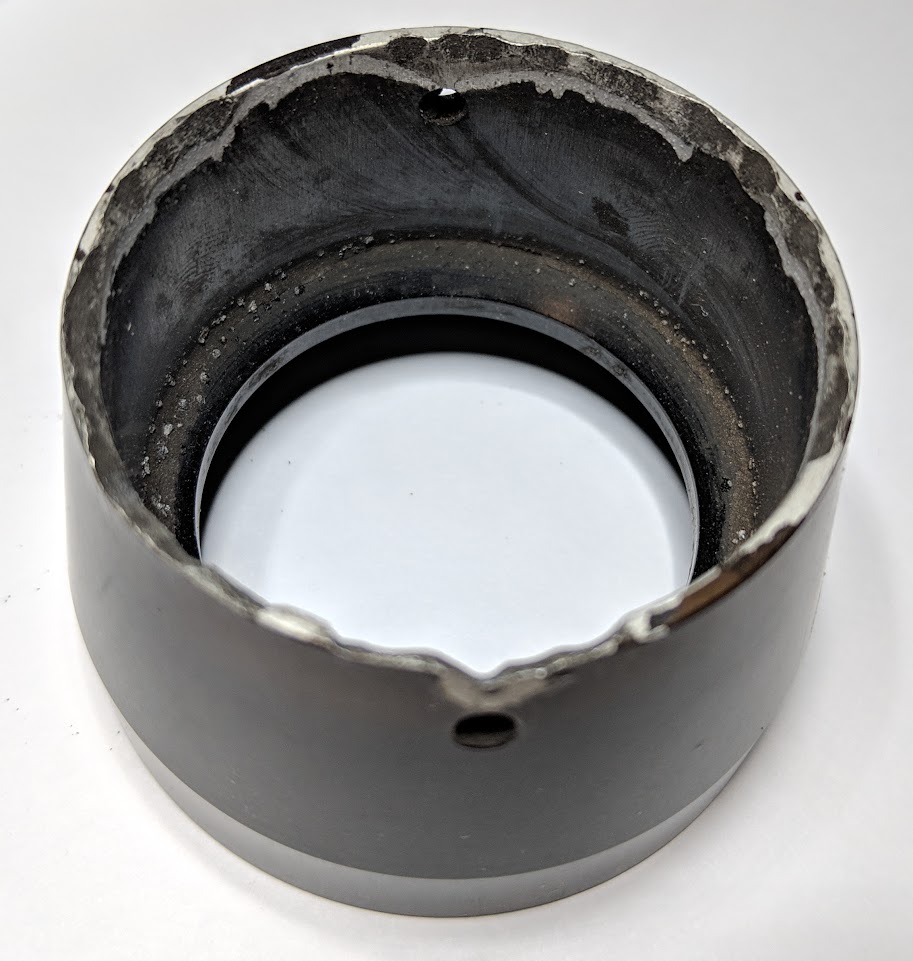 And here's a shot of the discoloration of the anodizing near the base of the tailcone. 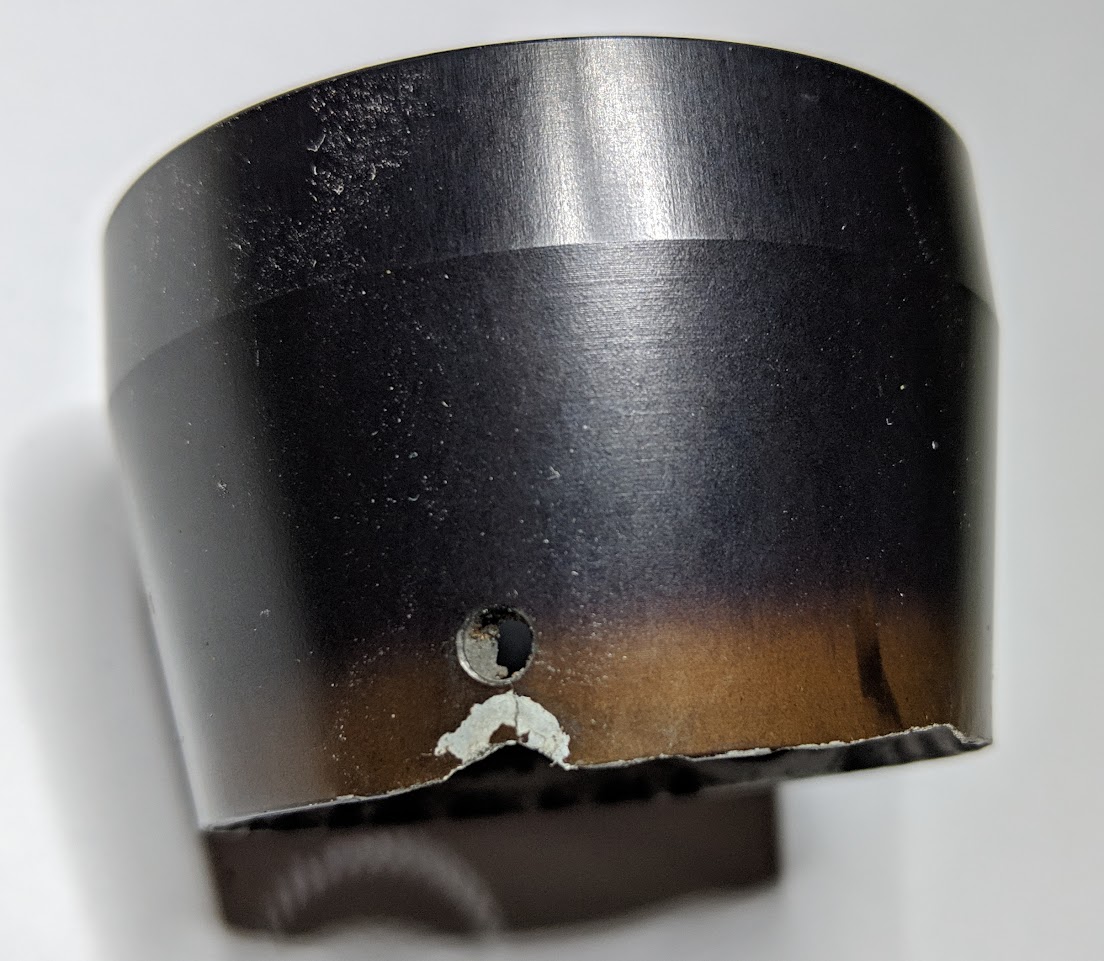 And here are a few close up shots of the FARG damage I mentioned earlier as well. 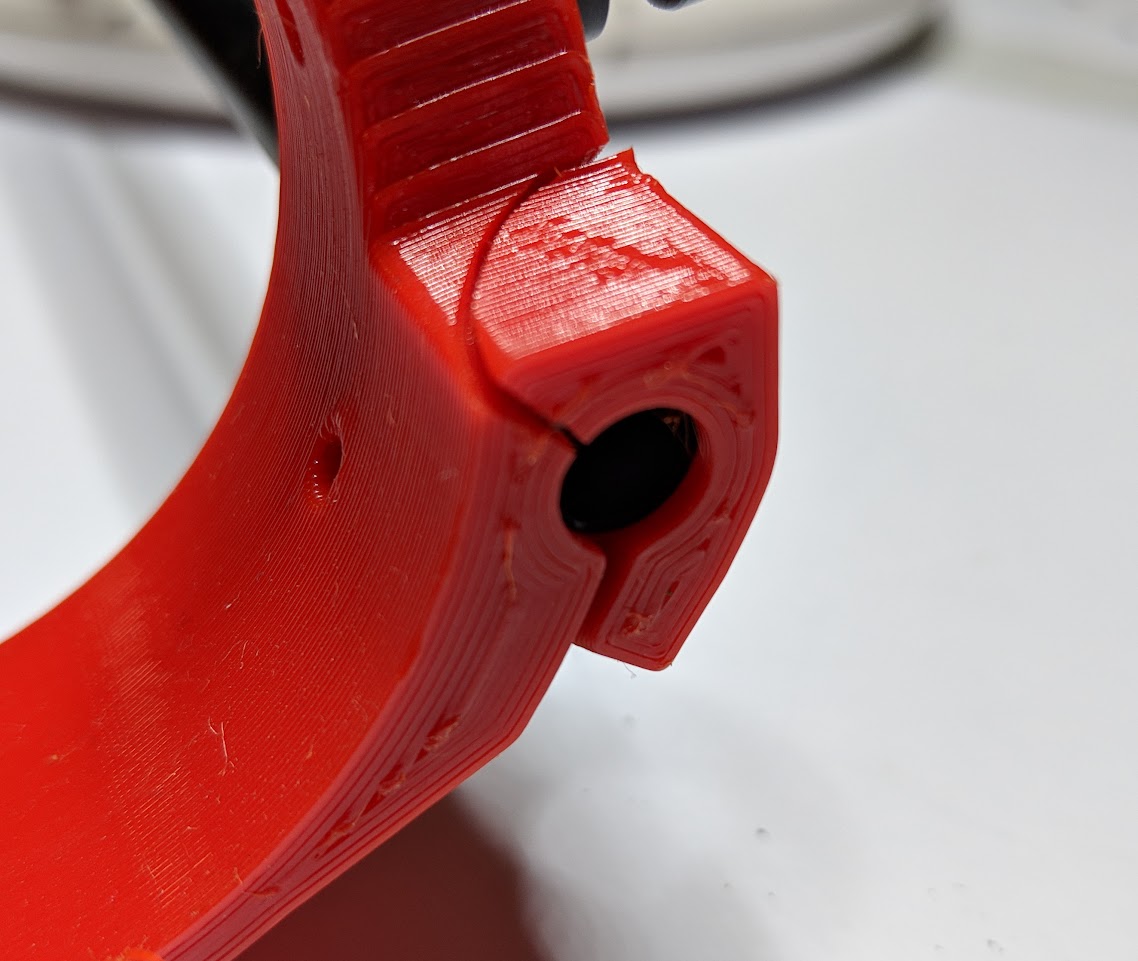 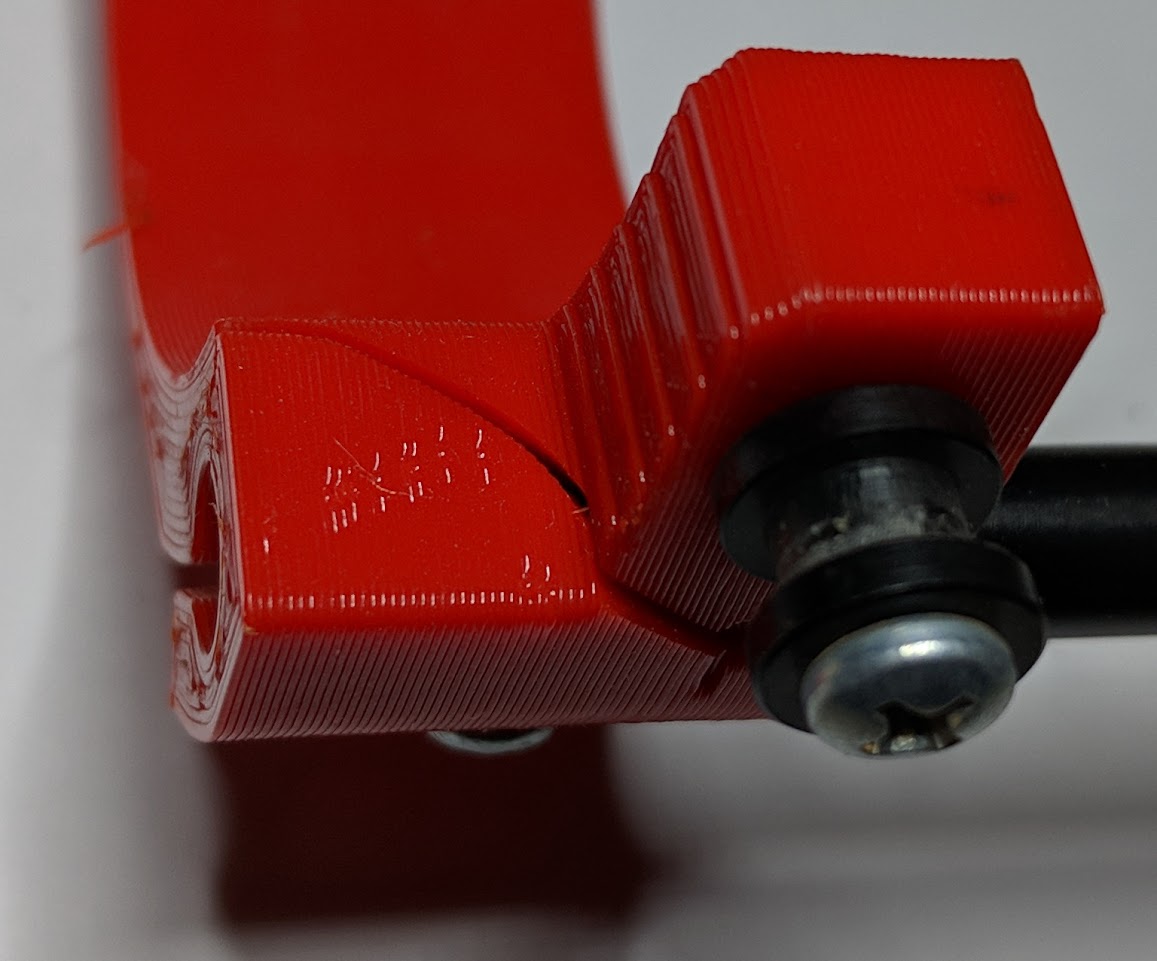 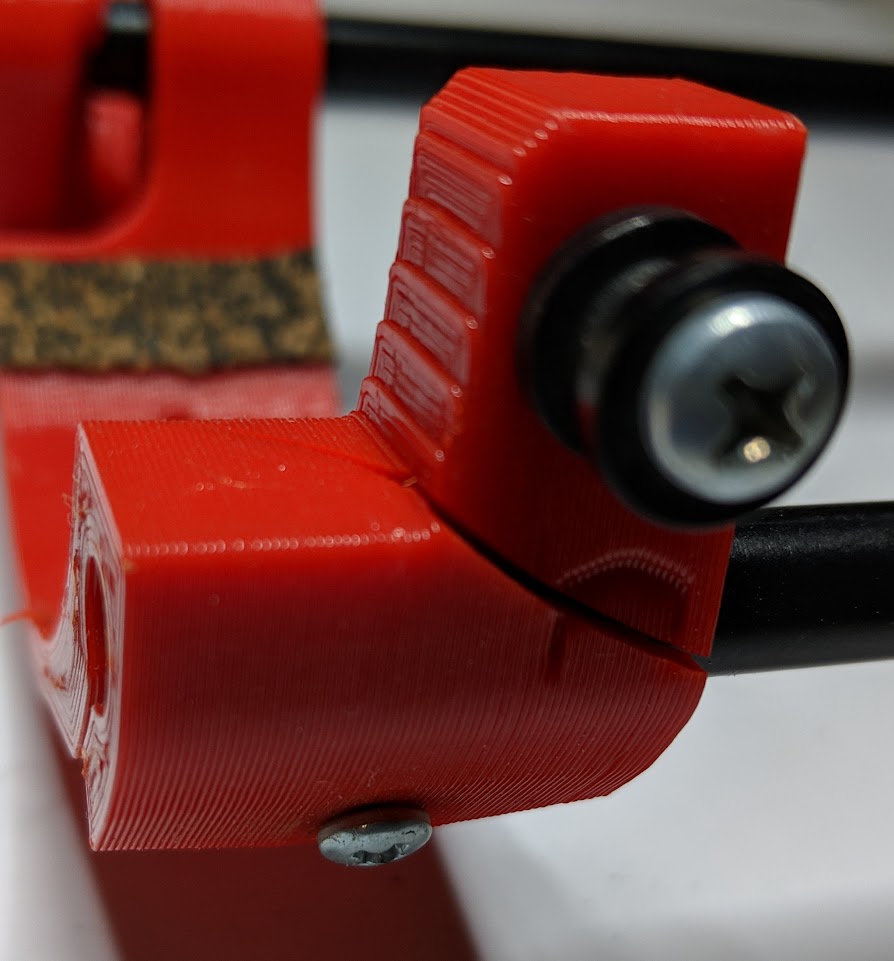 I should also mention that the CTI Pro54 L935 motor, whilst being labelled as a plugged motor, actually WASN'T plugged, much less threaded. Historically CTI Pro54 plugged forward closures had a threaded insert for positive motor retention AND were plugged (as in, the forward closure was fully sealed from the combustion chamber).

The forward closure that came with my L935 had a circular cardboard insert over what should have been the threaded insert. I carefully removed the cardboard insert and was quite shocked to see an empty charge well and the top of the smoke grain. I was able to work around this and effectively threaded the forward closure to my motor retention point but I thought this might be something worth mentioning to the community. For the record it also appears that CTI have added a second O Ring to the forward closure of some of their 54mm motors. Maybe this is due to the K300 CATO issues? Regardless, ideally I would prefer to know about these changes before I'm on the flight line. Is this sort of thing documented anywhere?
Andrew Hamilton
AMRS 28 L3
AMRS Records Committee Chairman
Max Alt AGL - 26,850ft - L935 - THUNDA 2019
Max V - 3,004 ft/s, ~Mach 2.67 - L935 - THUNDA 2019
Top

I have used a lot of CTI 54mm reloads and there has never been a plugged one that I have found. Each time I used the adaptor (Aeropack?) and threaded that into the charge well. I am fairly certain I have burned an L935 along the way and don't remember finding anything different to what I normally expect.

FWIW I have also taken to bonding the forward closure to the liner with epoxy before flight, as a precaution due to the catos that have been observed.

OverTheTop wrote:I have used a lot of CTI 54mm reloads and there has never been a plugged one that I have found.

Excluding two "White - Longburn" reloads all of the plugged reloads leverage the 54-6GXL casing. Have you flown lots of them? IIRC I've flown 4 54-6GXL reloads; one L1030, two K300s, and one L935. I do believe each one has has a slightly different forward closure than the last. In order of burning.

I'll reach out to Blake soon, I should hopefully have a warranty replaced K300 from the one that CATOed on me in 2016. I'm curious to both count the number of O rings on the FC as well as see if there's a threaded insert.

FYI here's what I'm talking about when I refer to threaded closures; this is a completely unmodified Pro54 Forward Closure. And from the post CJ made over on TRF it appears that there are two variants of this threaded closure (or were). One for the K300 due to the thicker liner, the other I assume for the rest of the line. But this is the point, to my knowledge none of this is actually documented in a public way or at least I've not found it. Hence my questions, I'd like to have a better understanding of these variations.

OverTheTop wrote:Each time I used the adaptor (Aeropack?) and threaded that into the charge well. I am fairly certain I have burned an L935 along the way and don't remember finding anything different to what I normally expect.

I own the AeroPack adaptors, both the 38mm and 54mm variants. I used one on my K300 flight at Balls as I was using internal motor retention and at that time I had yet to see a threaded forward closure. Of course my K300 did have a threaded closure but I wasn't aware it would so my design was incorporating the AeroPack adaptor. I had to use it as my internal threaded rod point wasn't deep enough to engage the threads on the FC as I had designed it to mate with the AeroPack adaptor sitting on top of the FC.

All that said I've not used the adaptor since and don't plan to do so in future. I'd rather pull the FC, use a drill bit (by hand) to ensure the internal diameter of the FC will match my threaded rod, fully assemble the motor, and then screw it in identically to how you would if you're using the AeroPack adaptor. I prefer this method as it's simpler, lighter, shorter, and seems robust enough to support some pretty serious performance.

OverTheTop wrote:FWIW I have also taken to bonding the forward closure to the liner with epoxy before flight, as a precaution due to the catos that have been observed.

I plan to start to doing the same moving forward.

Looks like the tail cone is actually cracked above the hole. I’d be tempted to chuck it on a lathe and remove the tip so it can be used on an L without melting.
QRS: 124
AMRS: 32 L2 RSO
Highest Altitude: 13,647 feet
Fastest Flight: Mach 1.55
Largest Motor: CTI 1115J530 IM
Current Project: X Wing
Top

SpaceManMat wrote:Looks like the tail cone is actually cracked above the hole. I’d be tempted to chuck it on a lathe and remove the tip so it can be used on an L without melting.

To date I have only flown the one L935 - in my initial Light Sabre - and the tailcone suffered no damage other than some slight discolouration at the exit. Internally there was some small loss of the anodizing, but no melting, again at the exit.

OTT - thanks for the tip on epoxying the FC on these motors.

Users browsing this forum: No registered users and 17 guests