Hi,
Thought I'd create a post of my latest project - which is a Carbon Filament winding machine (as opposed to wrapping CF fabric around a mandrel).
Ultimately, I hope to use this winder to make myself some Carbon Fiber tubes for various rocketry projects into the future, including my L3 build which I hope to start a little later this year.

Why go to all this effort? (There is a lot of mucking around to get it working properly).
Figured I'd learn quite a bit from it....and that once I sort out the engineering issues I could wind tubes fairly easily with minimal effort.

Here are a list of "mechanical" issues I've had to contend with...
* Epoxy resin /Filament interactions (not too much, not too little, but just right amount of epoxy impregnated in Filament)
* Filament tension
* Filament winding width and spacing and angles - This is a biggy. Guides help to keep the Filament running straight.

Lots of headaches and it isn't cheap stuff, so I end up winding it back on to the reel after each test...rather than cutting off and binning.


Here is a very short Youtube video of two passes at 30 degree laydown.

I use LinuxCNC on an old server with a parallel port. It is connected to the network and runs a web server, which has a small program that I connect to using my browser to generate appropriate gcode files. Lots of programming, lots of maths (vectors!!) . Using stepper motors to turn the three axis...like the ones in home 3-D printers...except larger. 3-D printer has been my friend in this side project.

Hopefully I'll have some long CF tubes to show off in a month or so.

Anyhow, if anyone would like to know more about it, ask away...

Did a FULL layer today - dry run at 45 degrees without any issues.

Here is a photo of how it looked at the end of winding. How much tension do you need ?

I assume the epoxy bath/applicator is a messy place....

If tension is too great, I find that when CF changes direction I can have issues with it not staying put on Mandrel. I'll probably use some Peel Ply I have here to help squeeze out excessive Epoxy.

This is a massive step forward from previous winding. 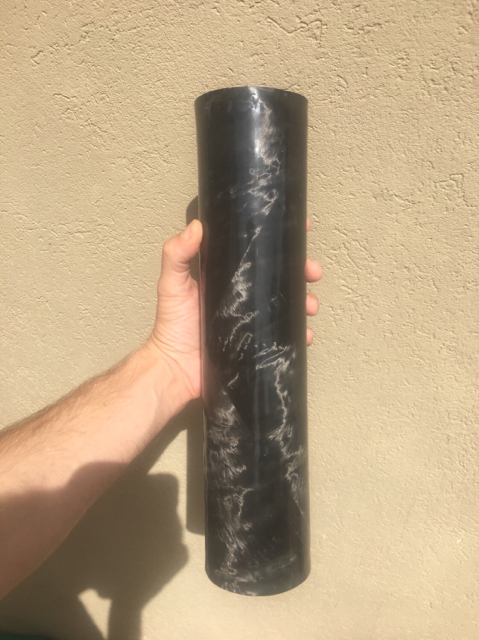 Look carefully and you can see the distinctive pattern. Did a test fit using Matt’s 75mm hardware. Was a good fit! (Thanks Matt!)

Didn’t go all to plan as you’d expect on the first multi-layer attempt.I didn’t set it to spin after finishing....so was more work to finish it. Didn’t finish as well as it should. Also, not enough excess epoxy expelled.

I’ve got some heat shrink tape and I can now mount a heat gun on the setup to help squeeze out excess epoxy evenly.


There is still much to be done before I start winding the next tube, which if satisfactory will be used for my next rocket project.

What epoxy are you using?
Top

The West Systems epoxy really hugs on to the roller and the CF tow, even with the doctor blade and high tension rubber band.

[quote="joeman"I use LinuxCNC on an old server with a parallel port.[/quote]

I can't put to words how much I enjoy the above sentence Joe. You're leveraging a parallel port in 2019!?!?! That's just plain awesome.

You're doing some great work, thanks for sharing and keep us up to date on your progress.

And yes, I recommend you switching to Renlam/Araldite K3600 for your epoxy system. Everything about it is wholly superior when compared to Wests in this use case.

Thanks for coming and saying hi at Thunda

Yes, I remember using parallel port for some other project 20+ years ago!! Here I go again.

Well I’ve spent about two months getting my head around FEA and I think I finally have a model of 3” tube with M3700 with various masses and forces you would expect at burnout....lift at nose cone, lift at fins, drag, etc

The result is that with 4 layers (each layer containing fiber in both directions, the failure index is really low.... about 0.005. If I play with laminate thickness (because I have had to guess it a bit), it creeps up to 0.01.
All acceptable.

Nice work on this!

I shouldn’t be so surprised, but I finished the wind!


Had almost one screwup with wires... (don’t ask). Fortunately it paused about a second later. (I have a pause between layers). Fixed it up and resumed it.

A few surprises...
* did take longer than expected ... a lot longer. Screwup in calcs....but not critical
* it was epoxy hungry.... even with renlam
* I think the app made it do about 5 too many passes per layer. Not serious but must be something wrong in code.

I have managed to put heat shrink tape on this time and a heat gun to help the cure and squeeze excess epoxy out.

I’m pretty sure it will be an improvement on last one.... and possibly usable for my next build - L3 build. 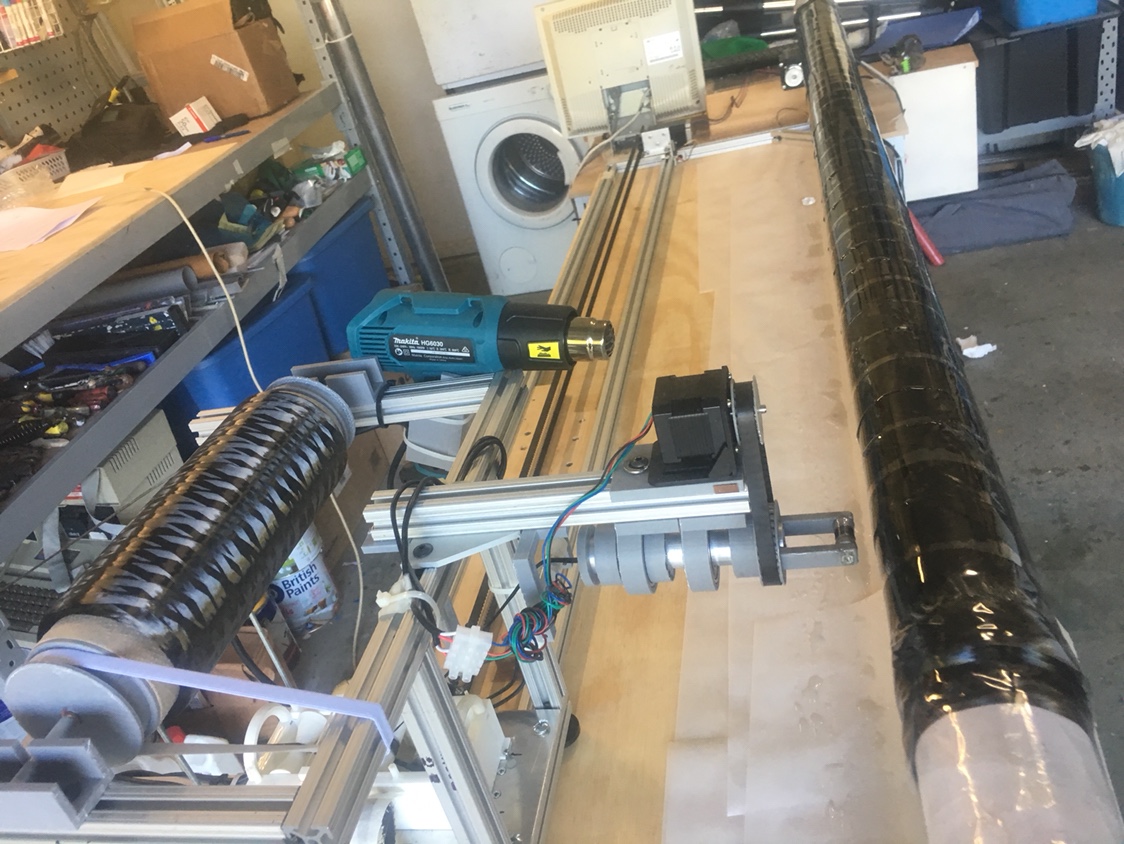 Next step is dry ice tomorrow to remove it from mandrel.