Managed to do a little "inspirational" video of it winding.

Thanks for sharing Joeman. That looks like it's working really well. What is the heatgun used for?

If you want to embed video in a forum post, just include the video code, rather than the whole URL like this:

[youtube]N7a1MllMcOo[/youtube]
Crop Circles: ... just a bunch of guys looking for their rockets ....
Top

Heat gun for cure and then post cure
Also to heat shrink tape to squeeze out excess epoxy.


I have been having no luck getting the tube off the mandrel.

Need to use something better than aluminium.

Re: RE: Re: Building a CF Tube

joeman wrote:I have been having no luck getting the tube off the mandrel.

Might be worth grabbing some liquid nitrogen. Gets another 100 degrees cooler than dry ice, just be careful handling it, freezer burns happen quick at -200!
- Ben

Liquid nitrogen has crossed my mind, but I am concerned it might affect properties of the CF tube

I was able to pull it off by about a foot very carefully with CO2 tree and 4wd.

I need to reassess before going further.

It isn’t imperative to get it off. I might just have to accept and move on.

Has anyone had experience with cardboard mandrels?

I’m looking at purchasing some, and thickness is something to consider.

i.e. Do I get 8mm thick and spend 3 weeks soaking in water? Or can I get away with 2mm thickness?


Will lateral strength be satisfactory for a 2mm thick (up to 3 m long) section?

What are you wrapping around the mandrel to help release it?

In your video it looks really shiny.

Its seems that most people use glad bake paper. It certainly works well with PVC mandrels.

I am wondering if several layers of glad bake might help.

Best of luck. Your "wrapping machine" is wonderful.
Top

Drew
Measured the tube... and got the following

I’m happy with that. Better than last tube.

Thickness at end did vary from about 2.15mm to 2.9mm which isn’t good, but it is closer to the end where the cf bunches up as it changes direction.

Length of tube 176cm. But about 8cm of unusable tube at each end.

joeman wrote:i.e. Do I get 8mm thick and spend 3 weeks soaking in water? Or can I get away with 2mm thickness?

You could always use a steel core with centering rings along the length of it and then put the 2mm cardboard mandrel on that.
Crop Circles: ... just a bunch of guys looking for their rockets ....
Top

I polish the aluminium tube... then get as much grime off as possible using Metho and paper towel.

Then I wrap cash register tape around it... then packaging tape (holds it together)

Then at end I wrap heat shrink tape... just a small overlap so as I heat the tube, it expels excess epoxy.

There is minimal bunching up, though not perfect. See photo. 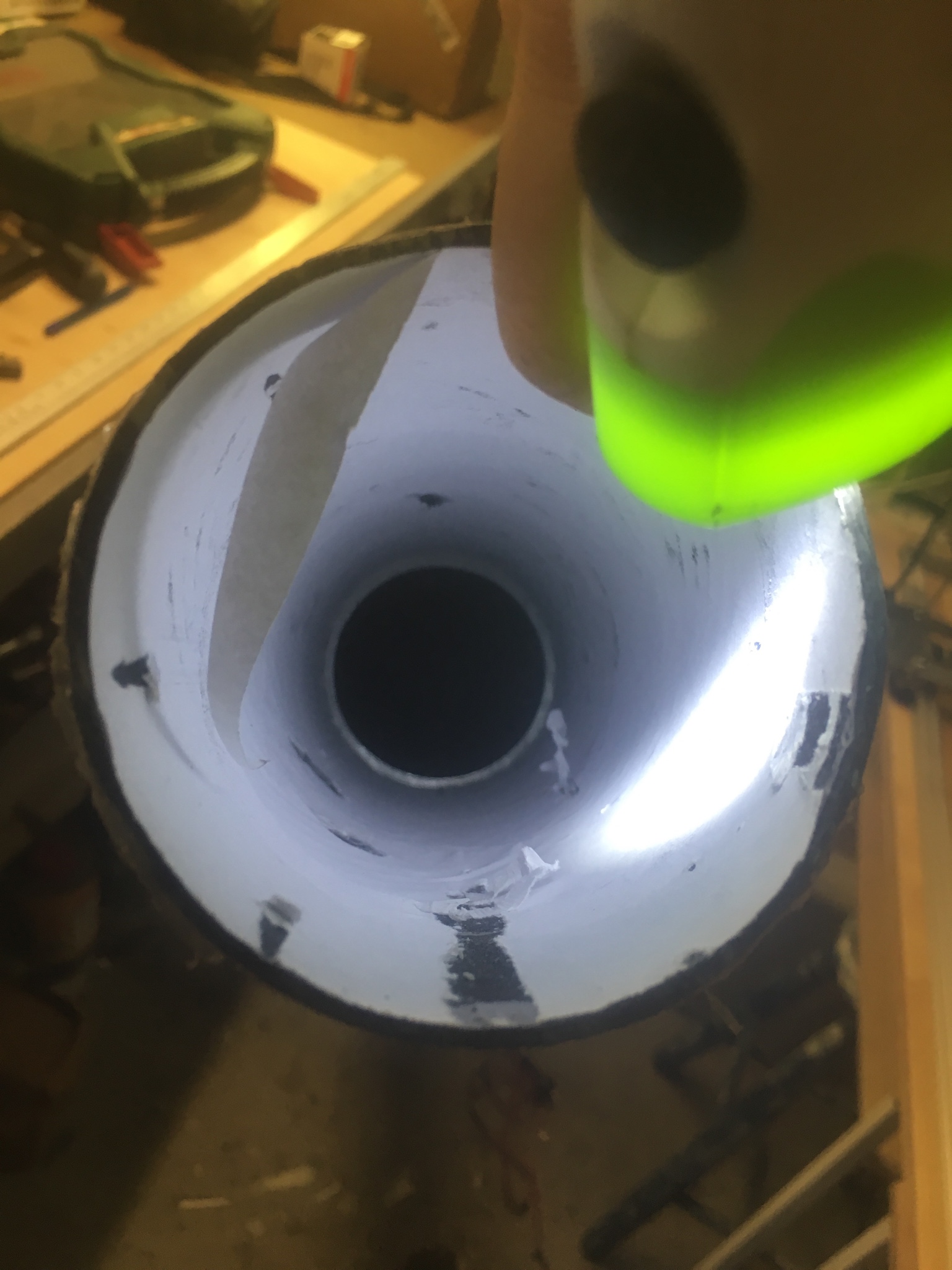 I have used glad bake on smaller tubes using twil 2x2 and that has worked well. I had wrapped it around twice to give it the required thickness to allow insertion of motor casing. I was hoping to move away from that because as tubes get bigger... one would have to use multiple cuts of glad bake and this I’m concerned would lead to extraction issues. In effect , I was trying to emulate the what I’ve seen done using xwinder.

I was hoping to do even bigger tubes, so I guess I’m really just going to have to properly think out Mandrels.

Many years ago I read an article about making fiber glass tubes.

I can't find the article now I need it, but the basic principle was a mandrel with a removable insert that eases the tension.

You take a piece of PVC and cut a slot using a circular saw or maybe a router in a jig.

You then insert a strip to fill the gap and wrap it in carbon or fiber glass.

Once your resin has cured you pull out the insert and this releases the tension in the tube and makes it easy to remove the mandrel. 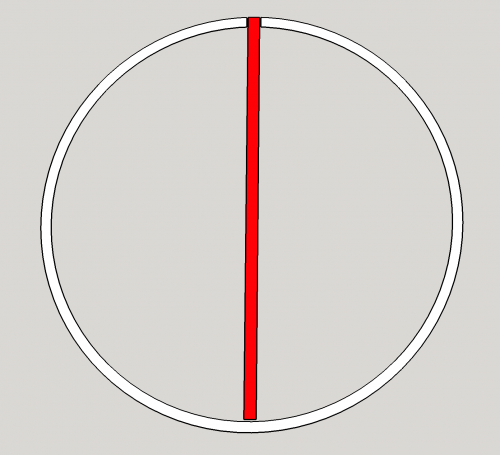 White is the PVC tube, red is the insert.

Once its wrapped in glad bake the join would disappear.

The insert would need to held in place some how until it was cured.

The biggest issue would be that you can't run anything through the middle of your mandrel....unless you had a second inner tube.

RE: Cardboard
I've been scouring the Internet for 3" cardboard tubes (76mm...etc) and it isn't so easy to find.

cardboardtubes.com.au do min 300meters run. So that kind of rules that one out...unless I can piggy-back off someone elses run. But I suspect that is unlikely since no one seems to sell much that size.

So it does make me wonder if a collapsible one is the way to go. I certainly don't like the wastage...disposable cardboard.

I like your idea. I was thinking two pieces, but I can see that your idea could be quite advantageous.
i.e. still fairly dimensionally correct. (i.e. better than two halves...i.e. two cuts)

Perhaps several 3-d printed couplers placed along the length....then when it comes to extraction ...push (smash?) the 3-d pieces out?
[I can deal with a bit of wastage

]
Might still need to deploy Dry-Ice...but might help considerably to reduce the pressure.
I'm guessing two layers - paper/tape would get around the "gap" issue...so we don't actually need to plug it.

The Aluminum I've been using is 3mm thick. I should ask them for the 2mm thick, so it would have more chance of flexing...reducing pressure.