I had been thinking about getting my L1 for a while, but definitely no plans to build an L2 machine!

But then I launched my L1 rocket, and as soon as the parachute opened I thought "L2 would be fun". So here we are on the slippery slope to bankruptcy.

So far the design looks a bit like this.

- Dual deploy with an electronics bay in the middle
- Drogue at the rear, main chute up front
- 4 big fins (aircraft grade plywood laminated with carbon - through the wall and probably fibre glassed to the motor mount)
- Short stubby plastic nose cone (with a cheap location device inside)
- 38mm motor mount
- Overall length around 1.6m
- Stability with a J motor is about 1.9

OpenRocket says it will fly to about 3,000 feet on a J motor. Which is more than high enough for me (double my current altitude record!).

Like my L1 Loc IV the airframe will be based on Loc Precision's 100mm tubing. It's strong, easy to work with and I can get my arm inside it.

The body tubes and nose cone are on the left with my Loc IV for scale. I will cut down the tubes, so the rocket won't be quite as long as shown here.

The tubes are almost certainly strong enough as they are, but I plan to reinforce them with some fibre glass sleeve. 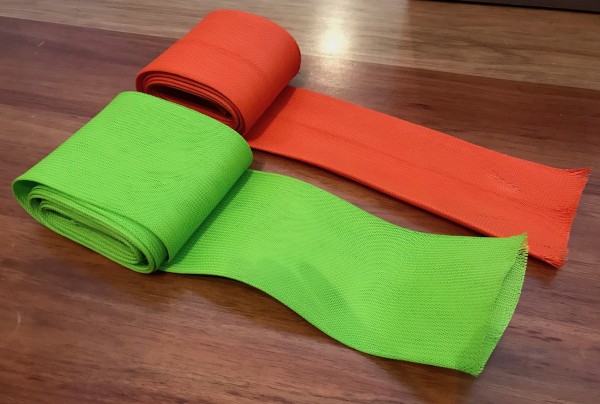 I'll probably use the orange one with some orange pigment in the resin. If it looks good enough I won't paint it.

For deployment I will decide between 2x Missile Works RRC2+ and a Public Missiles Co-Pilot. 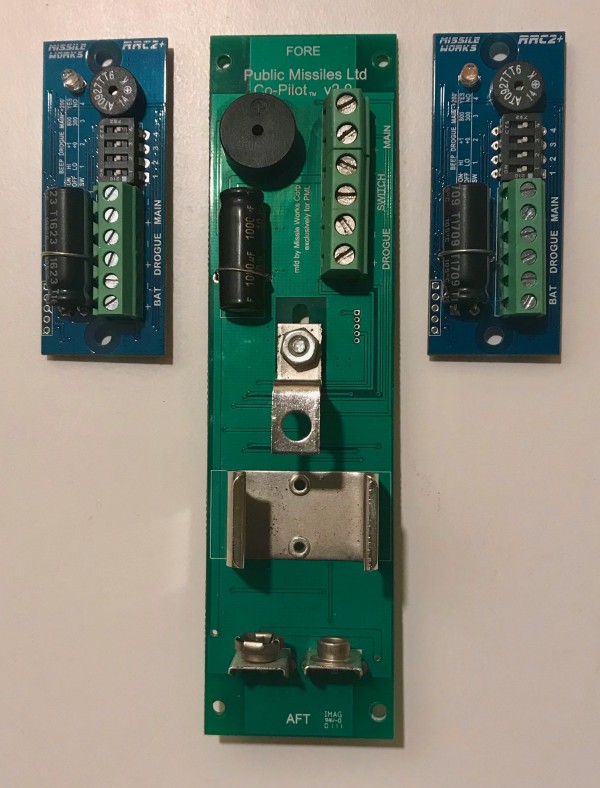 I am favouring the 2x RRC2+ at the moment.
The first RRC2+ will deploy the drogue at apogee and then the main at 800 feet.
Back up for the drogue will be the motor ejection charge on the full 14 second delay.
The second RRC2+ will just deploy the main at 500 feet as a main back up.

It would be nice to use the second RRC2+ as back up for the drogue but the only deployment options are apogee or apogee +1 second. Drogue at apogee and back up drogue at apogee +1 second is not enough buffer for me. If OpenRocket is correct apogee will be at 10 seconds, so the 14 seconds motor delay will give a nice 4 second buffer before the back up fires.

For the main chute I'll use the 48 inch Bama chute from my Loc IV. 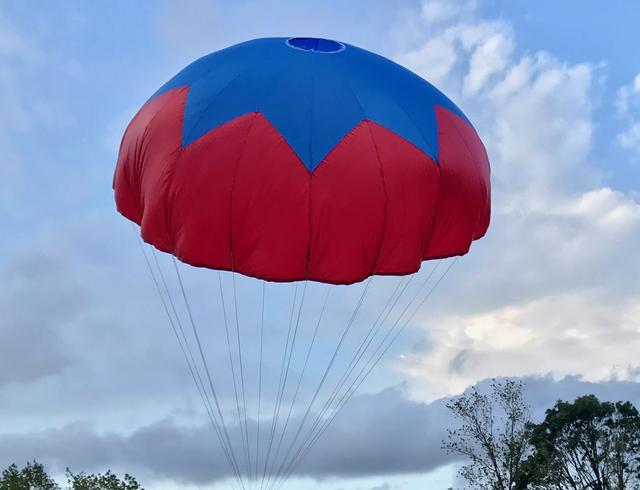 For the drogue I will use a 24 inch Droge-Osaurus from Dino Chutes. 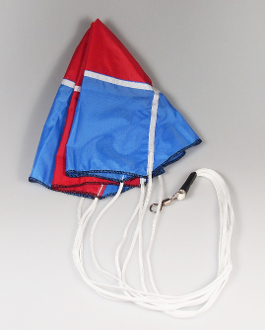 This is by far the toughest chute I have seen. Looks bullet proof and the colours just happen to match the main chute.

Okay that's more than enough rambling from me. Now on with the build.
Top

SpaceManMat wrote:Looks like it will do nicely for a cert flight. If you add fibre glass it will put the weight up, might want to plan on bigger motors.

I will definitely keep an eye on the weight and redo all the sims when I have the final weight.
Top

I have given a little thought to the theme and colour scheme for this rocket.

I think I am settled on orange for the airframe and maybe green fins.

So the obvious choice is a Carrocket: 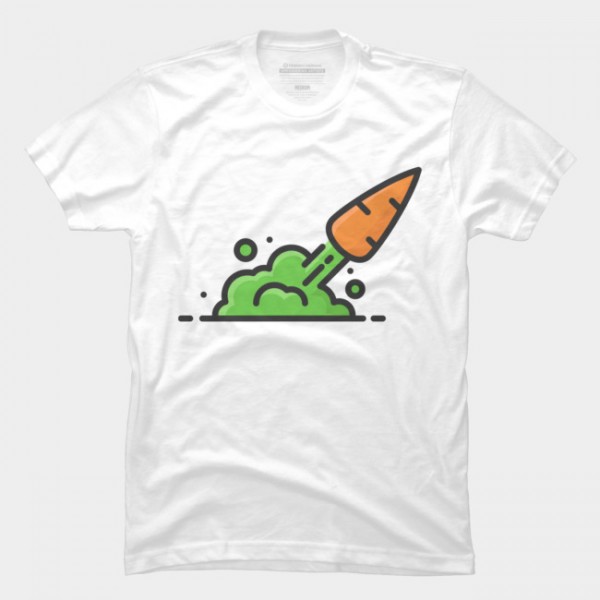 Looks good, my only suggestion would be go for a 54mm motor tube, and adapt down for 38. Gives you the option to play with bigger motors, try out tracking electronics etc. Aeropac retainers and adaptors are super easy to use together.
- Ben

RainierWolfcastle wrote:Looks good, my only suggestion would be go for a 54mm motor tube, and adapt down for 38. Gives you the option to play with bigger motors.

RainierWolfcastle wrote:Looks good, my only suggestion would be go for a 54mm motor tube, and adapt down for 38. Gives you the option to play with bigger motors.

Thanks for the feedback on the motor mount.

I had already given this a bit of the thought and still haven't made a final decision.

There are 3 reasons that my initial design includes a 38mm mount, and its all about cost really:
1. I already have a Loc 38mm motor mount tube and a 38mm Aero Pack retainer. I don't have anything in 54mm.
2. I planned to use a single use motor. 54mm motors are a bit more expensive than 38mm.
3. I have a template for 38mm centering rings (I plan to use this a a template to make more using a router table and flush cut bit).

So that's an additional $109 for the upgrade, and some of those items aren't available in Aus, so I will have to pay international shipping.

but it would be nice to have the flexibility

Well, if you include the cost if a 54mm motor then you can take out the cost of the adapter

But really the aeropac adaptors are awesome, I've got the set up to 54mm and it's nice to be able to add a few more motor choices to each rocket. Longer motors the next size down are usually cheaper for a similar total impulse.

Then you can save that 38mm tube and retainer for when you get a kit show up with a 29mm hole that looks a little too small!
- Ben

As I try to finalise the design I am interested in people's thoughts regarding how the rocket comes apart.

The back end is easy, but I am not sure what to do with the forward body tube.

Do I attach the forward body tube to the AV Bay like this: 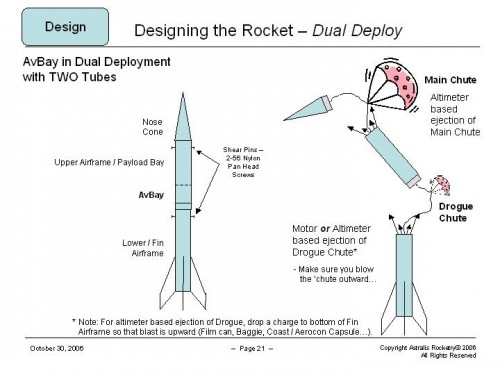 Or attach do I attach the forward body tube to nose cone like this: 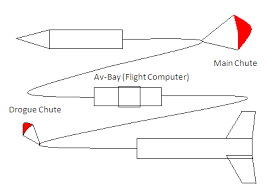 I will only attach it with removable rivets, but its still an important design consideration.

I will have some simple electronics in the nose cone, so I am leaning towards option 1, as it will make the nose cone easier to access. However I feel like the main chute is more likely to deploy with option 2 because there will be more force acting on it due to the additional weight of the forward body tube (this may be my bad science).

So which configuration is best?

And a supplementary question:

The option 1 diagram mentions that you must blow the drogue forward out of the rear body tube. My understanding is that the ejection charge is pressurising the tube, rather than blowing out the drogue. So this note is misleading. Most dual deploy set ups that I have seen have ejection cups mounted on the rear of the AV Bay and therefore don't "blow the drogue outward".

So is it necessary to have the ejection charge behind the drogue?

Keen to hear your thoughts.
Top

So is it necessary to have the ejection charge behind the drogue?

No, not if there is enough inertia or other force to get it into the airstream.


Couple of things to consider when making the harnesses:
1) Make the lengths so that the rocket parts do not bump together during descent
2) Consider what order the masses hit the ground. Remember the chute will usually provide a slightly better ground impact speed for objects that hit the ground later, since there is less mass being supported by the chute at that time.
TRA #13430
L3
"Everybody's simulation model is guilty until proven innocent" (Thomas H. Lawrence 1994)
Top

I’m following this closely. I’m currently building my Level 1 Cert rocket and hope to achieve it either this weekend or next month. Following that I have a LOC high tec that I plan to build in a very similar configuration for my Level 2.

Legendontour wrote:I’m following this closely. I’m currently building my Level 1 Cert rocket and hope to achieve it either this weekend or next month. Following that I have a LOC high tec that I plan to build in a very similar configuration for my Level 2.


Sent from my iPad using Tapatalk

Good luck with your L1.

I utilised option 2 for the Patriot, noting that the Patriot has 5 sections, the upper and mid airframes are attached to the Av-Bay. While I am still finalising the design of the rocket I thought I would start work on the nose cone.

I don't trust those little plastic loops on nose cones and I wanted to make use of the space inside the nose cone. So the first job was to cut off the rear end. I did this on a miter saw. 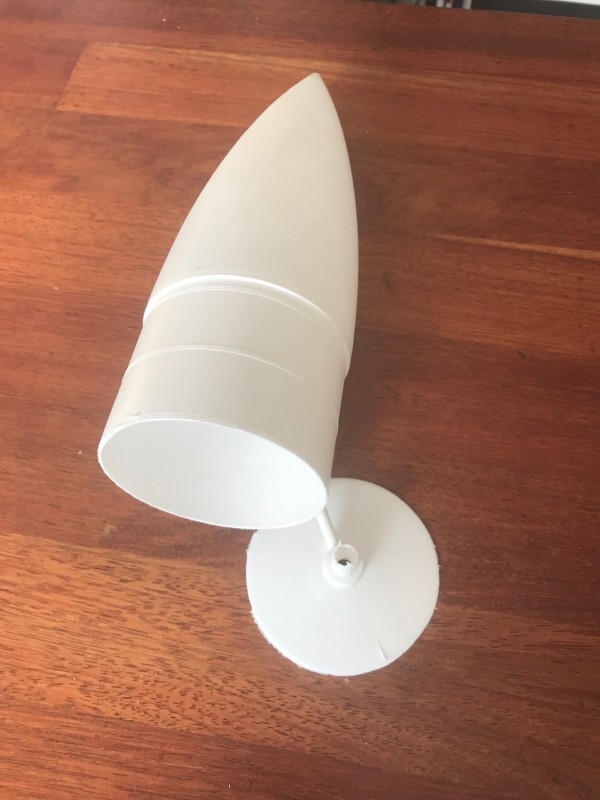 Next I designed a ring that fits snuggly inside the nose cone. I fits just beyond the shoulder, so it can't be pulled out. But it will also be epoxied in place. 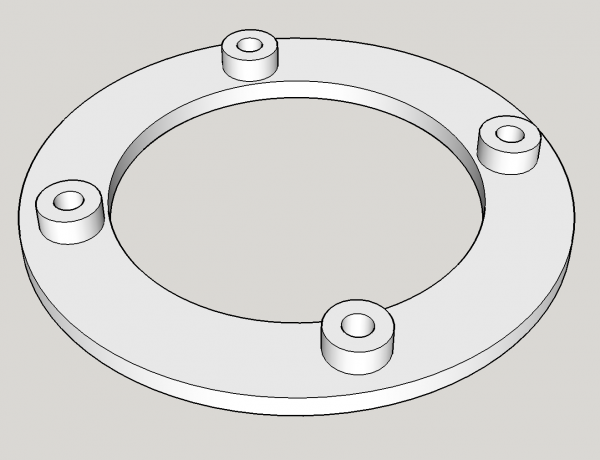 The 4 holes are designed to hold these metal inserts. These will be used to secure the nose cone bay in place. 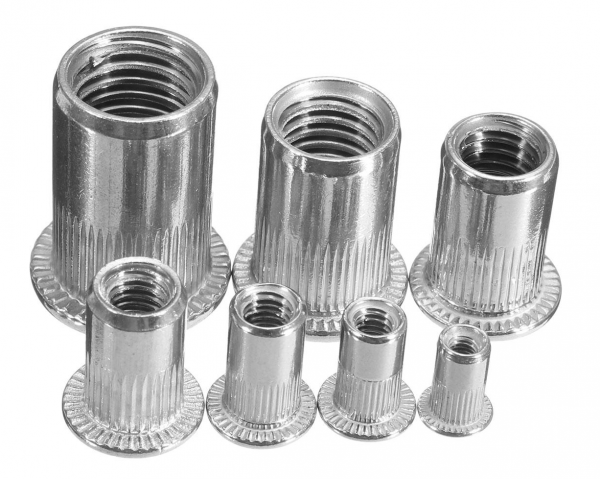 After 3d printing the ring I discovered it wasn't quite as stiff as I had hoped. Rather than reprinting it I designed a reinforcement ring to stiffen it up. 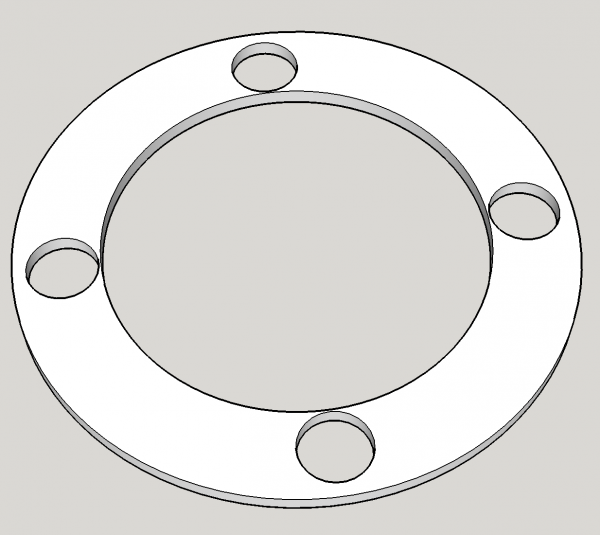 Test fitting the ring in the nose cone with bolts in place. 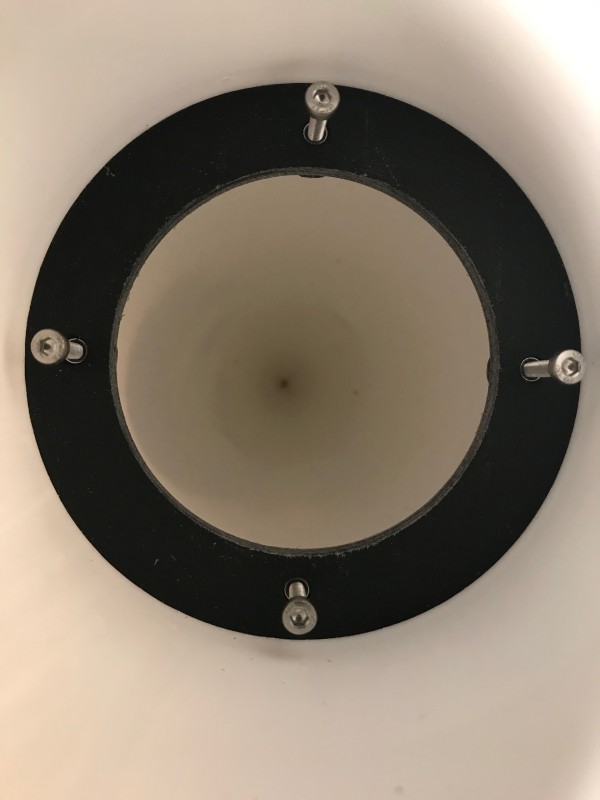 Next job was to design the plate that will hold the nose cone bay. This will also be 3d printed. 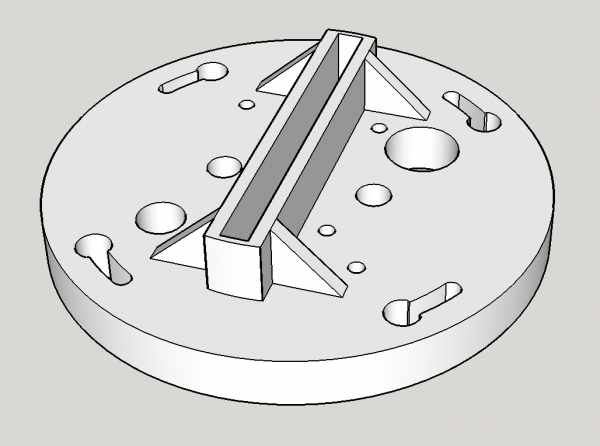 The slot on the top will hold a tongue that goes up into the nose cone and will have space for batteries and a timer. 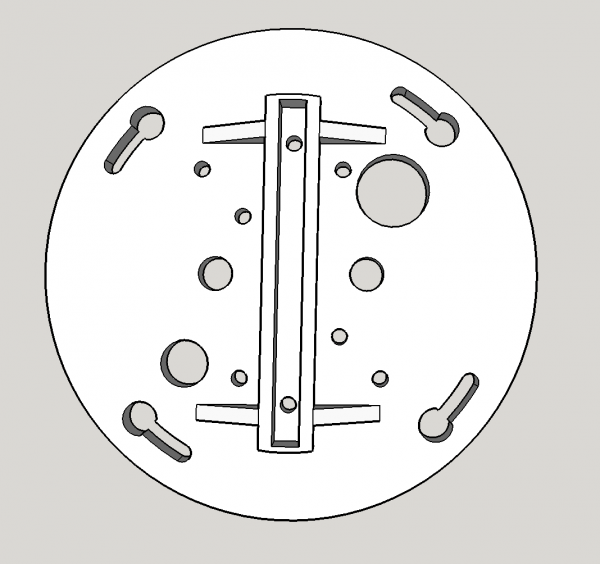 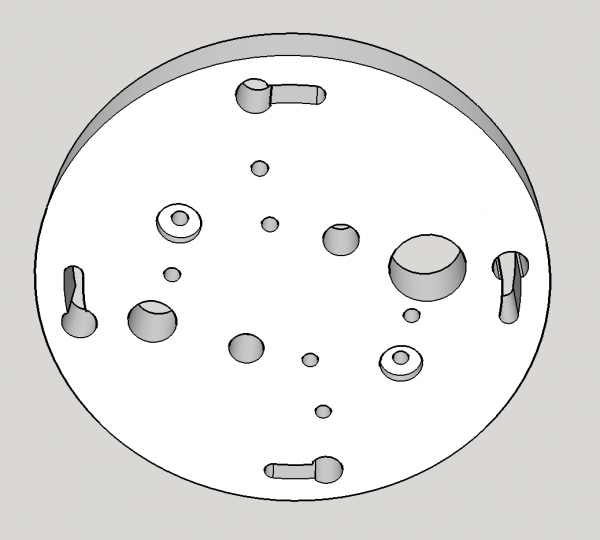 These plates and rings are traditionally made from plywood. For example John Coker's design: 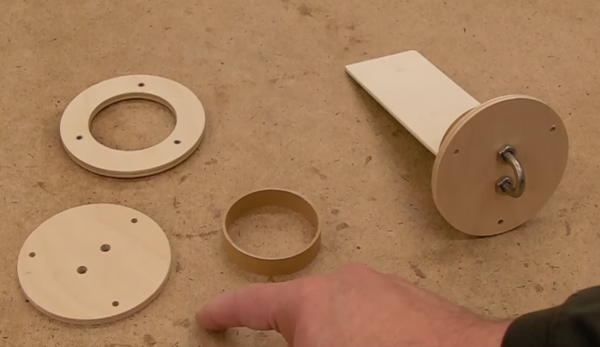 But I decided to go for 3d printed PLA because I could make the design much more precise and include features like the key holes.

I am sure some of you will be concerned about strength, but the main plate is 10mm thick and is printed with think walls. It's really tough and arguably stronger than plywood. I am not concerned about Z axis weakness because there will be lots of bolts through the Z axis.

Users browsing this forum: No registered users and 10 guests