So I've had an L935 sitting with Blake since 2016 or so as I wanted to fly it in a MD airframe at Westmar. Since the purchase Head End Deploy has become a bit of a thing in MD circles, as can be seen by the Wildman "Mach 2" kit. After looking at this rocket design and wanting to incorporate a cable cutter to deploy my main I decided to do away with the conventional AV Bay and instead do something more aggressive. I've built a single break Head End Deploy design that also incorporates a 54mm plugged forward closure threaded rod to serve as a motor mount. See below. 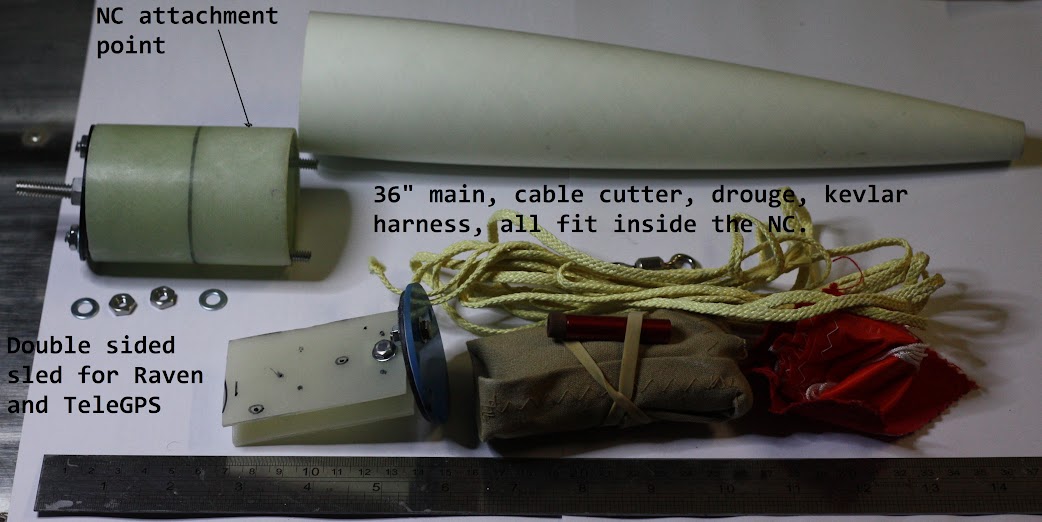 AV Bay in "Mach 2" airframe demonstrating how much of the AV Bay/coupling shoulder will be epoxied recessed in the airframe. 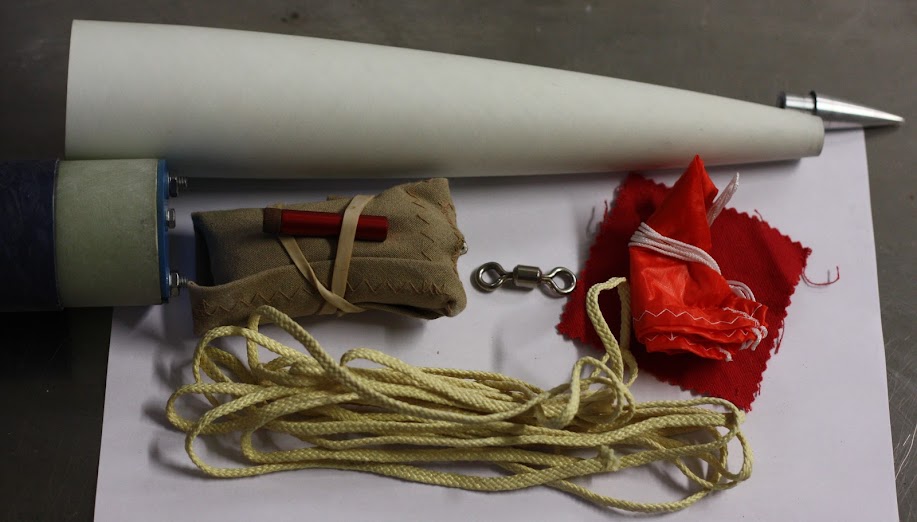 Avionics - will be flown with a single axis Raven 2 or dual axis Raven 3 and TeleGPS 1.0. I've got the airframe rolled and fins aren't that far out. And there's heaps more left to do. But this is a decent start. Below is a Openrocket sim of a slightly longer and lighter vehicle. I've cut down the AV Bay by 15-20mm from the sim and I always build heavier than any of my preliminary sims. Still, looks good to me!

Wow that looks pretty sweet to me

Big motor, little room for anything else

SpaceManMat wrote:Wow that looks pretty sweet to me:!: Big motor, little room for anything else

Thanks d00d! Should be a fun flight.

For the record every flight I'm planning for THUNDA2 will be leveraging this design in some manner. I'm going to fly a M2245 in a 75mm version of what's above and my two stage stack will have a 54mm sustainer quite similar to above. I won't be able to epoxy the coupler in place on that rocket as I'll need to wire up the HEI forward closure to the staging altimeter before flight so instead I'm going to use a "puck" with some nuts and use countersunk screws to hold the AV Bay to the airframe. The coupler will also be longer as hopefully I'll be fitting a GoPro Session 5 in the NC as well.
Andrew Hamilton
AMRS 28 L3
AMRS Records Committee Chairman
Max Alt AGL - 26,850ft - L935 - THUNDA 2019
Max V - 3,004 ft/s, ~Mach 2.67 - L935 - THUNDA 2019
Top

matthew
Cairns...no where near that

This is one of those moments where I said to myself "I wish I'd thought of that."

Thanks for the kind works Matthew, I do appreciate it. I must admit I've been mulling this design over in my head for months now attempting to eliminate any pitfalls in the design before I attempt to fly it. I think I've considered most issues but I'm more than willing to listen to any comments about "blind spots" I've not considered.

First off, I have had some concerns about the rocket still being stable post apogee event as I'll only be popping the NC off and leaving the AV bay (and all that mass) in the airframe. I'm not confident the drag of the open ended NC will be enough to stop the rest of the airframe from staying stable, especially considering the fact that there's a sealed bulkhead at the front of the rocket instead of a draggy open airframe. Hence the inclusion of a drogue which historically I've not used in MD designs as I've always been a drogueless sort of guy.

But flying a drogue when I'll most likely be having apogee deployment near or in the jet stream concerns me from a drogue chute shred perspective. So to mitigate this I'll using X-type chutes for the drogue. Top Flight makes X-types at a reasonable price so I'll be ordering a handful of them. Ideally I'd like a 10" reinforced drogue but Top Flight only makes their reinforced drogues in 18" or greater. I suspect I'll "test" the 10" standard x-type on the back of my car somewhere remote to see if it shreds in 100kmh speeds as well as test fit the 18" in the 54mm nose cone. I might move to a smaller main and larger drogue if required.

I've also had some concerns about the main chute burrito wrapped getting tangled as it'll be on the airframe/av bay side of the harness and not on the NC. So I'm hoping to mitigate that by weaving the kevlar recovery harness through the nomex a couple times so the harness is part of the burrito instead of separate to it. That should hopefully mitigate that concern.

Finally, given the expected apogee altitude I'm going to use aluminum cannon/cannons for apogee deployment. Ideally I'll have them recessed in the AV Bay but we'll see as real estate will be tight!

If you or anyone else can think of anything I've not considered I'd love to hear it. I'm not aware of anyone who's flown a design quite like this so any advice is welcome.

If you are worried about shredding a drouge you could also consider the rocketman ballistic drogues, they come in a 1 foot size and are meant to handle deployment at speeds up to 1000 mph. So long as the rest of the recovery gear can handle it.
http://the-rocketman.com/chutes.html
TRA #15165 AMRS #50
I do it because i can, I can because I want to, I want to because you said I couldn't. - Unknown
I have not failed. I've just found 10,000 ways that won't work. - Thomas Alva Edison
Top

Cheers for that vance2loud. I had looked at those but considering I can buy 4 Top Flight X-type drogues for the price of 1 12" RocketMan Ballistic Mach II drogues I figured it's worth it to check out the Top Flight offerings first. Basically I was concerned that using a Top Flight thin mill chute for drogue (my go to for small space MD chutes) wouldn't be strong enough for the jet stream. X-type/cruciform chutes have a low Cd which is an advantage for high speed drogues.

Alright, time to update this thread.

Here's a photo of the components for this bird. And here's the business end of the AV bay (with deployment canister recessed inside it) and the fins. 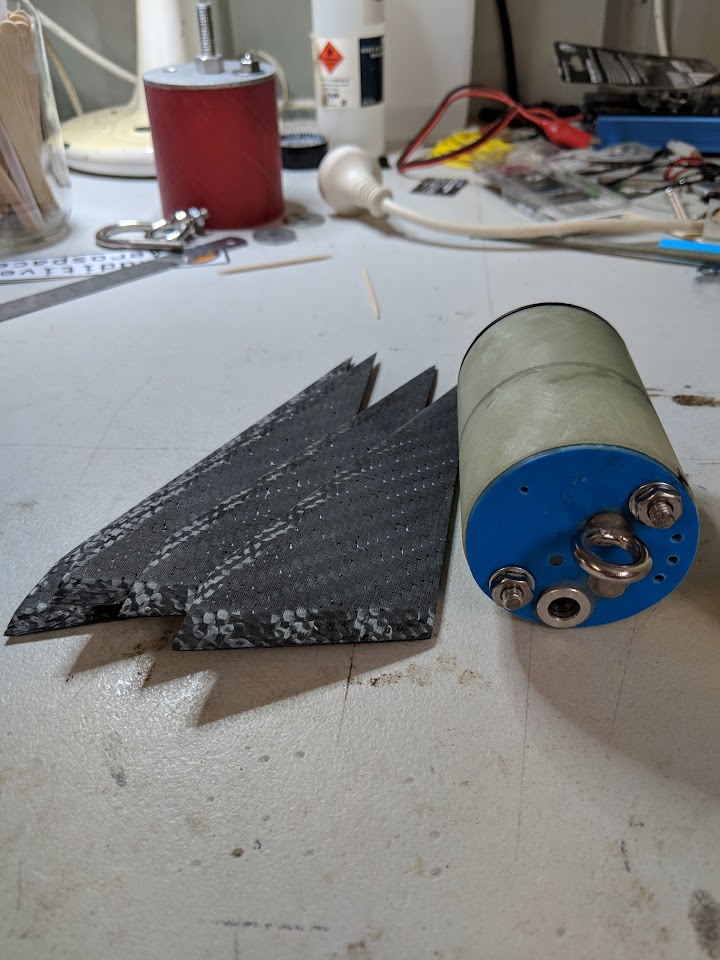 Tacking the fins on with the fin alignment guides. 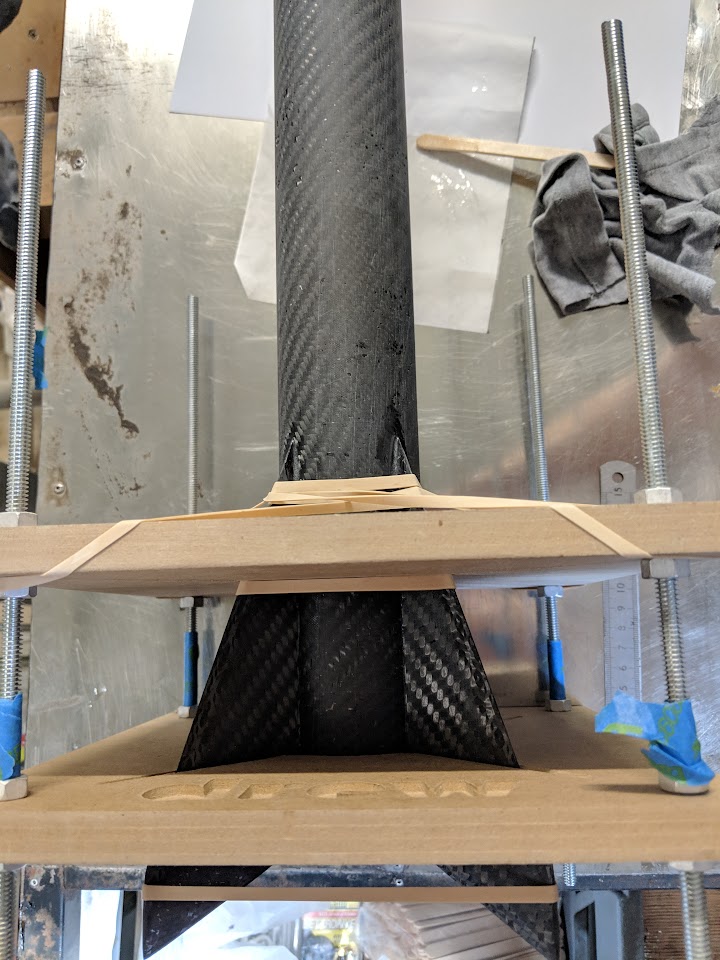 Airframe with fins and fillets beside the CTI Pro54 6gxl casing with tailcone. 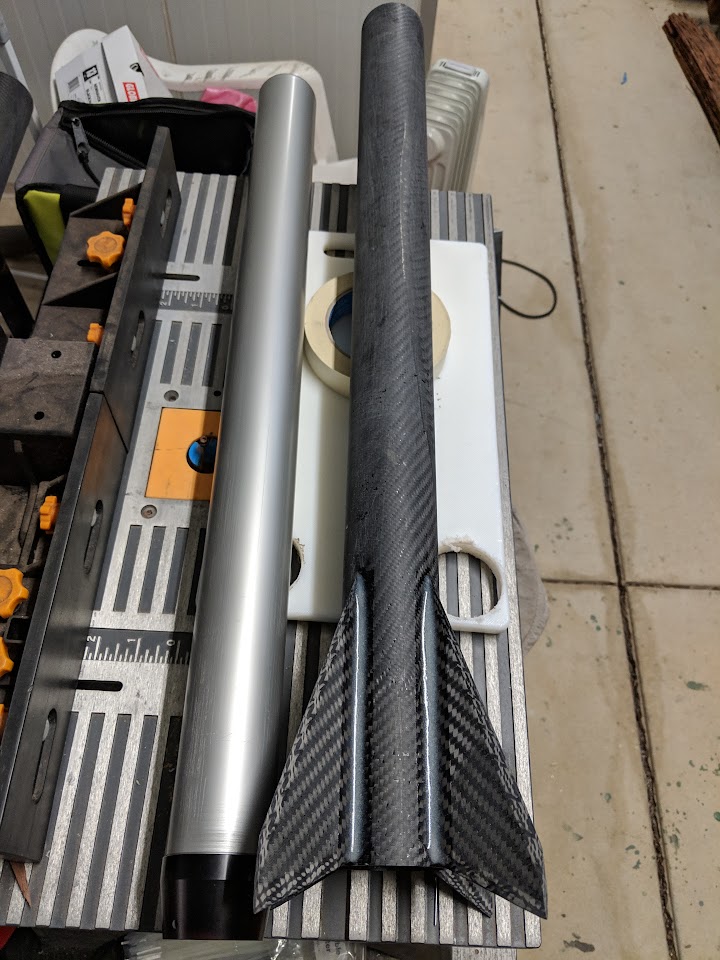 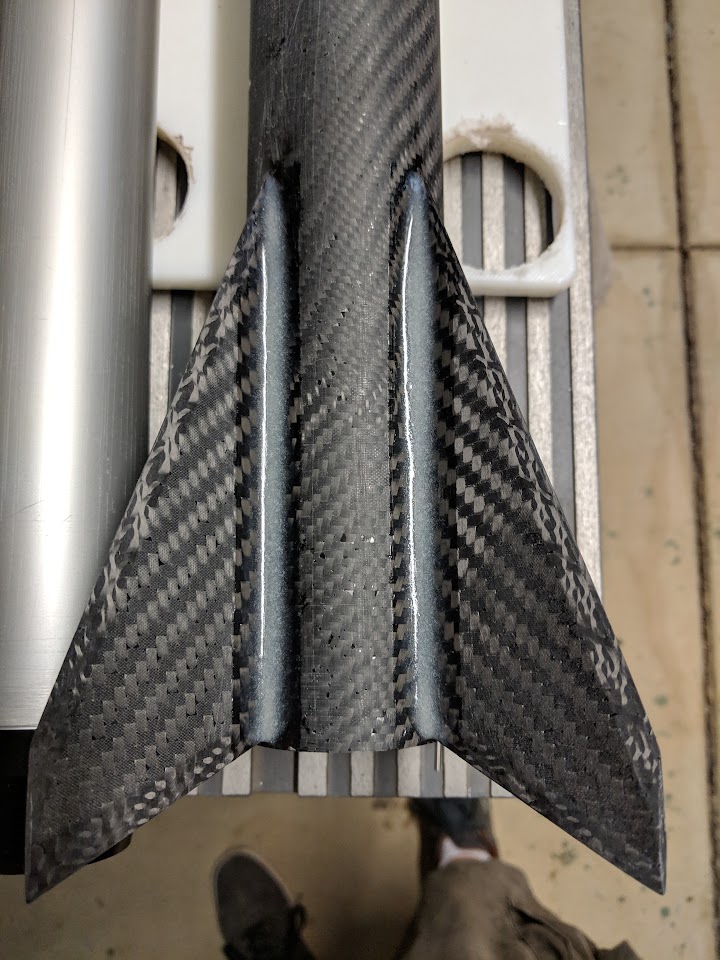 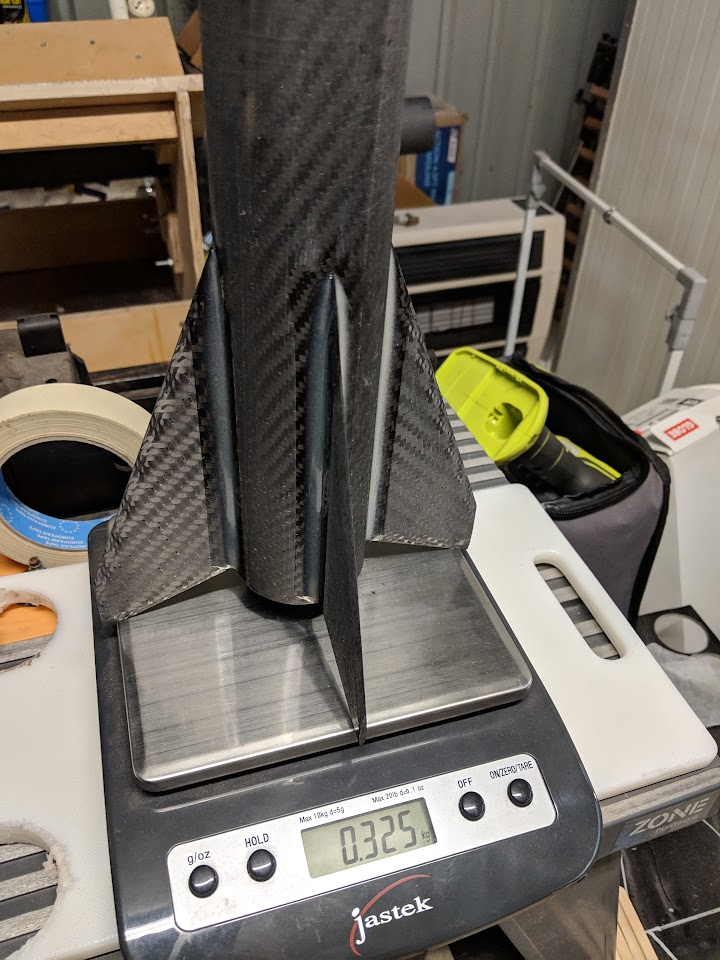 And finally it got a roughly 1/2 day stint in the easy bake curing oven. 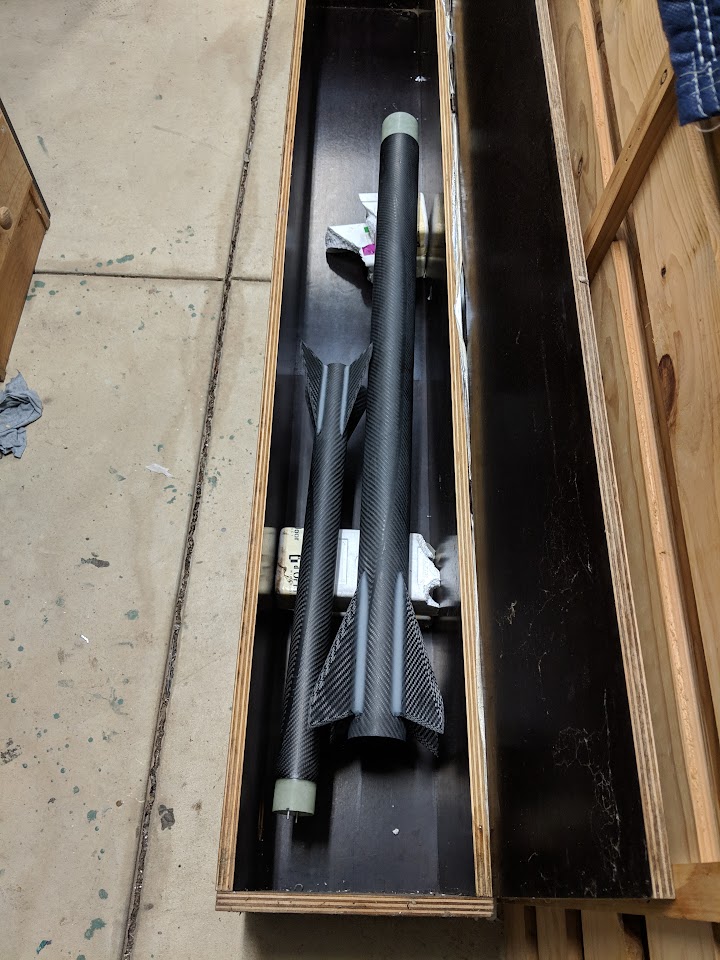 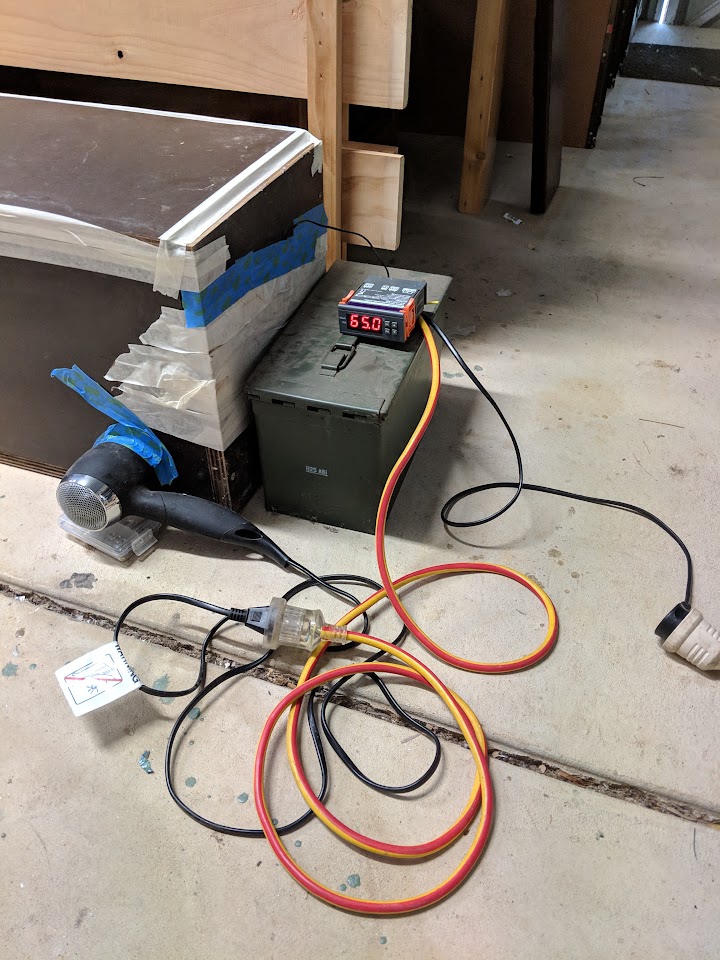 I decided to fly this rocket on Thursday for a number of reasons. First, I'd not tested the design before and figured starting with an L935 made more sense than the M2245. Second, I only took delivery of my M2245 on the flight line on Thursday morning. Given that motor requires grain bonding and ideally 24 hours for the glue to fully cure it was logical to fly this rocket first. The range didn't open until 1 pm on Thursday due to RAF exercises in the area. I was racked and in the air in under 40 minutes after range open.

A big thanks goes out to John for taking the below flight photos as well as George for providing them to me.
If it wasn't for them I wouldn't have had any stills from the launch other than from my video cameras. 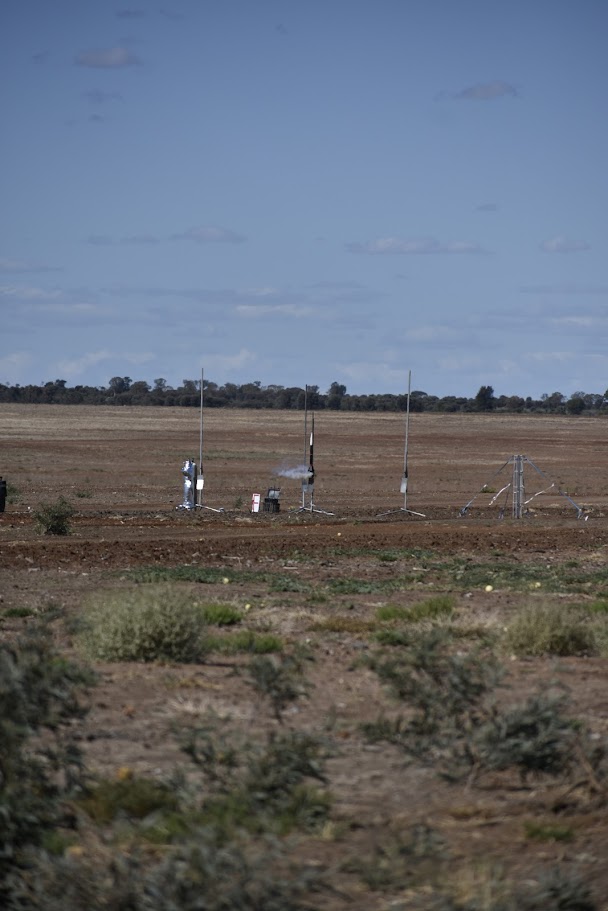 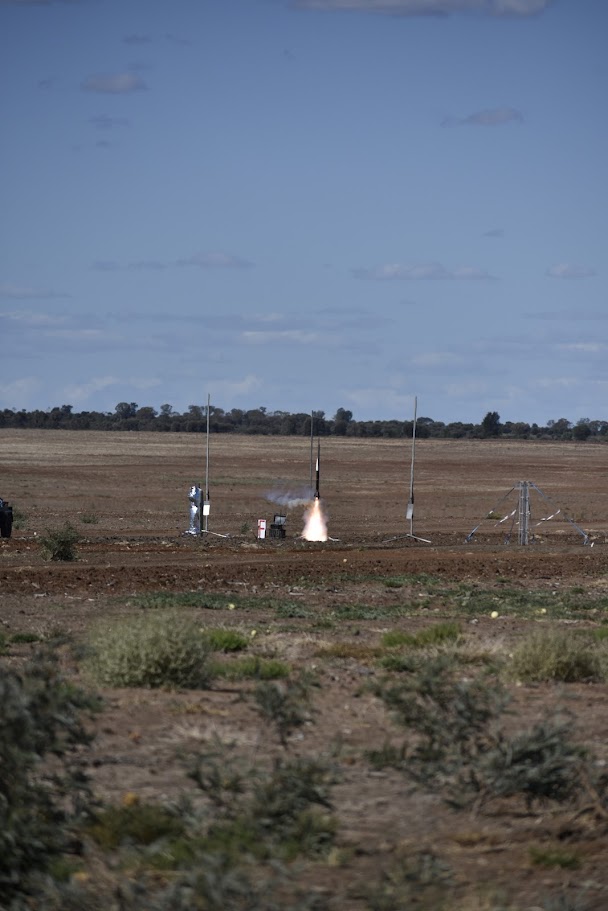 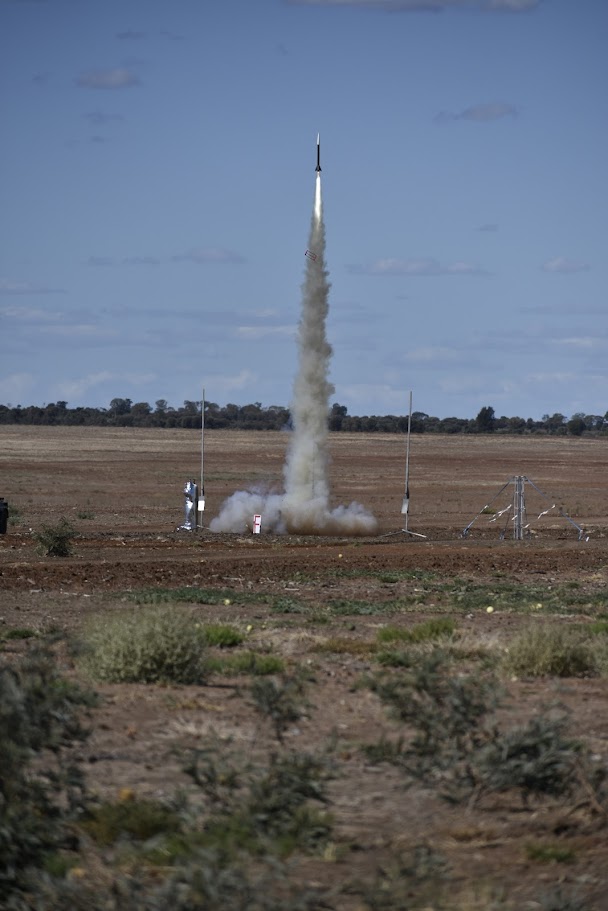 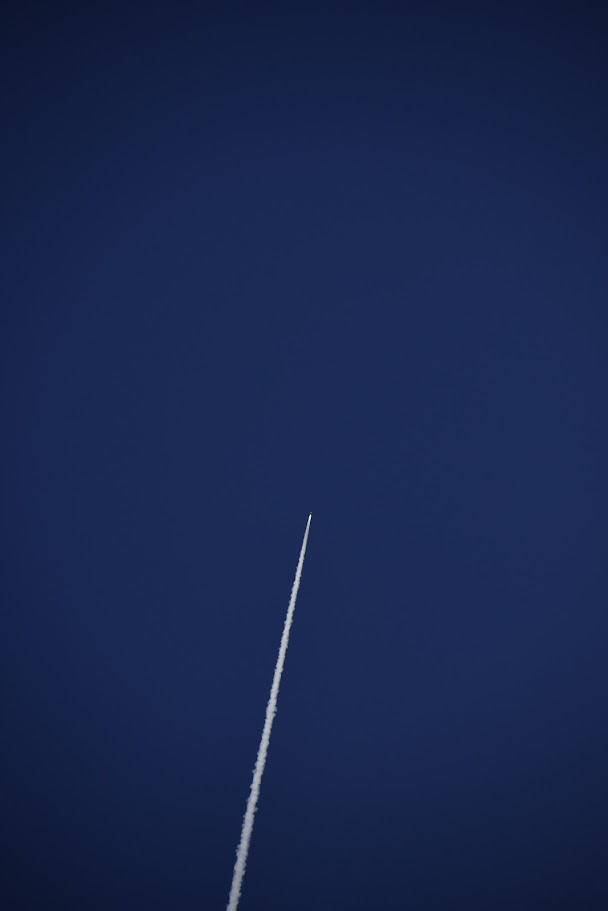 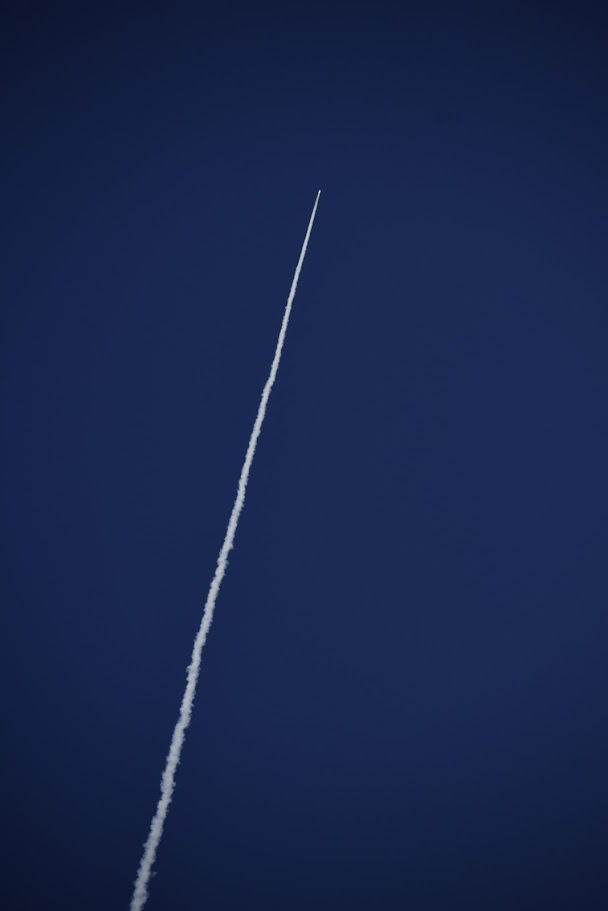 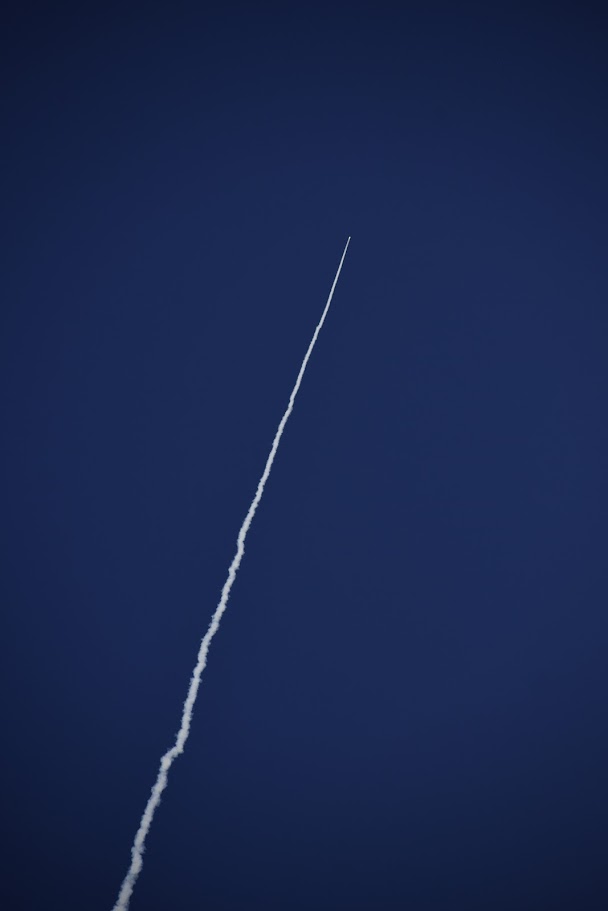 Recovery was incredibly simple. I used AltosDroid with a TeleDongle to monitor the flight and then jumped in my rental with Mike P. to go and collect the rocket. In AltosDroid you can click on the "Recover" or "Map" tabs at the top of the app and the software will lead you right to your rocket. It reads out on regular intervals something along the lines of "bearing 20 degrees right, distance x km". This allows you to action recovery without having to look at the screen which is quite useful imho. The rocket landed roughly 3.2km from the launch pad. Mike and I drove to within 300 meters of it with a bearing of 90 degrees which ensured from the road we were within closest walking distance to the rocket. 100 meters into the walk I could clearly see my main and turned off the telemetry.

As you can see below, on landing I popped a fin. 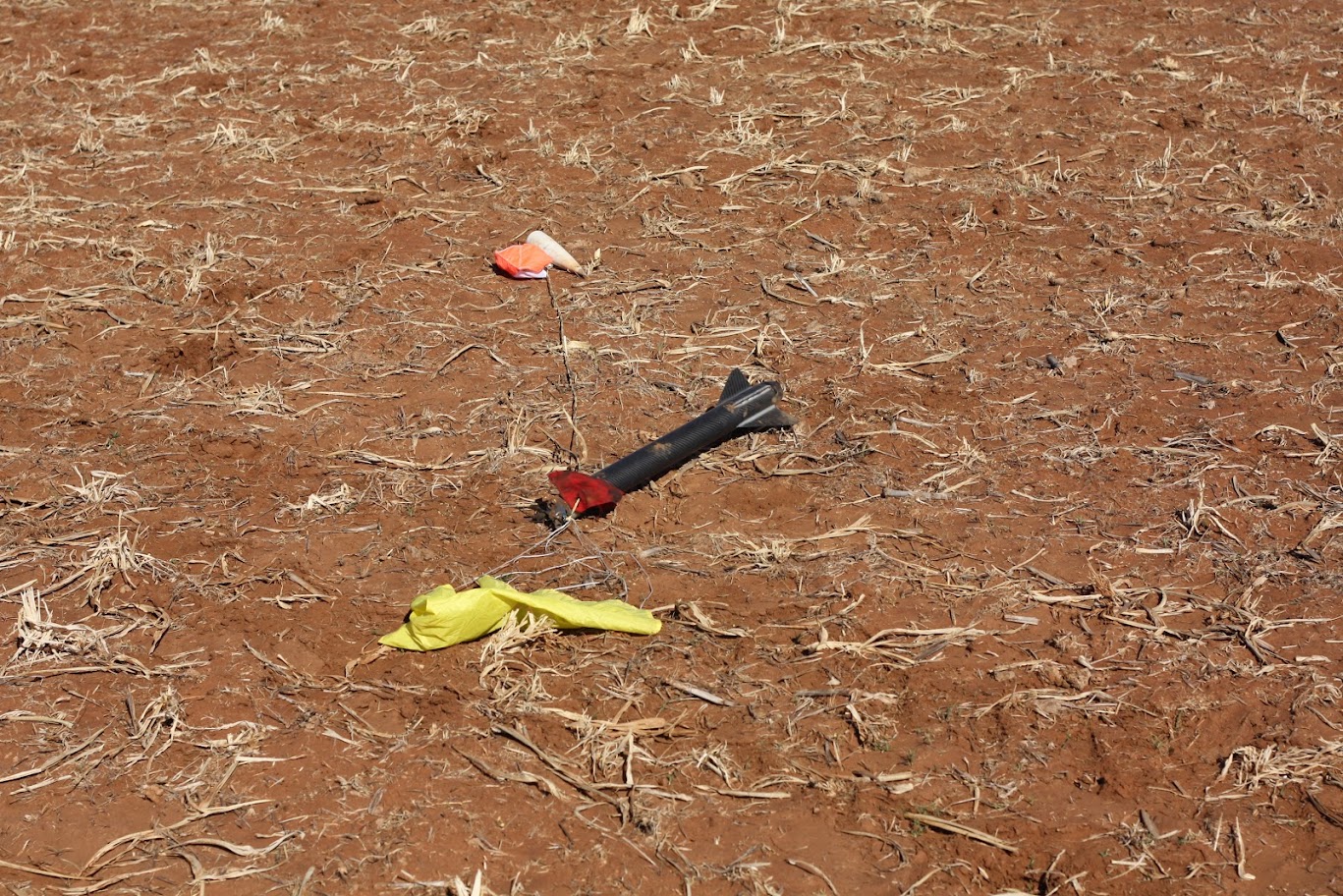 Here's a clearer view of the popped fin. The damaged fin was under the rocket. 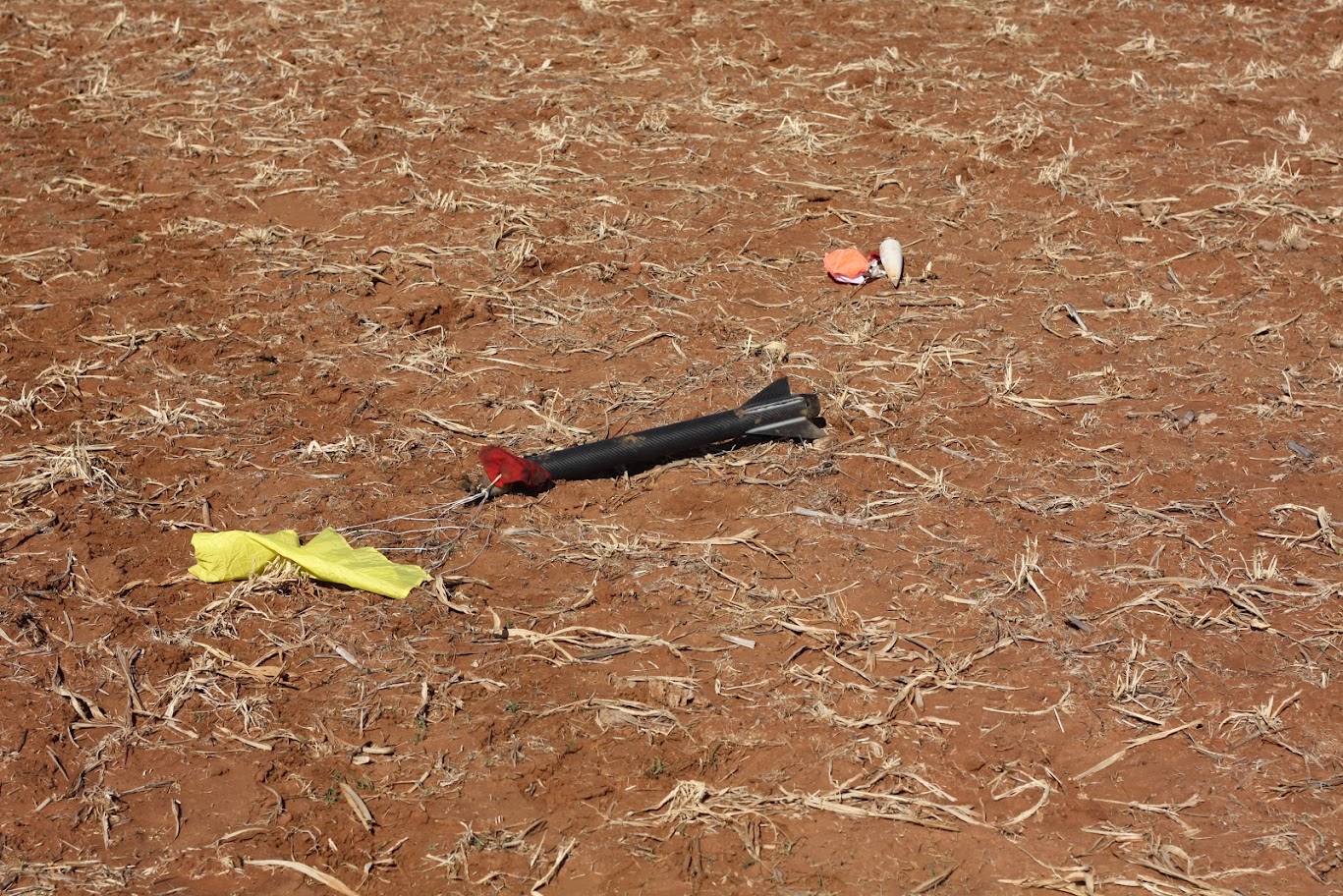 Finally, here are some of the stats from the on board Raven 3 and TeleGPS. 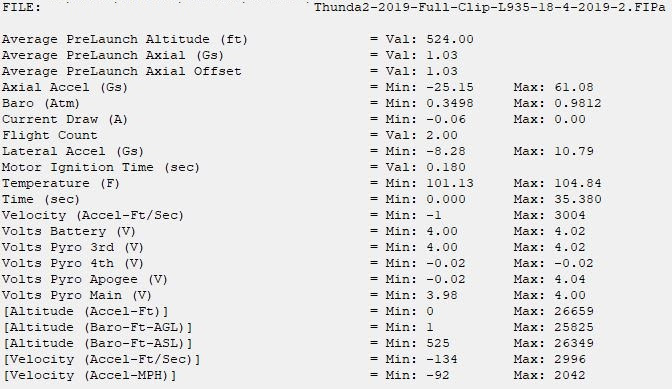 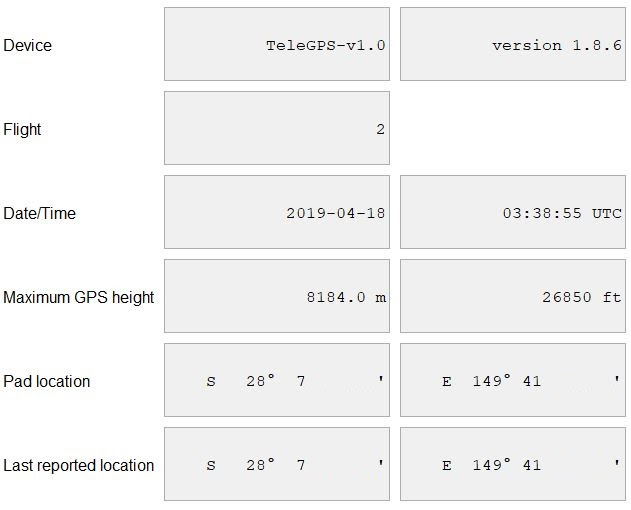 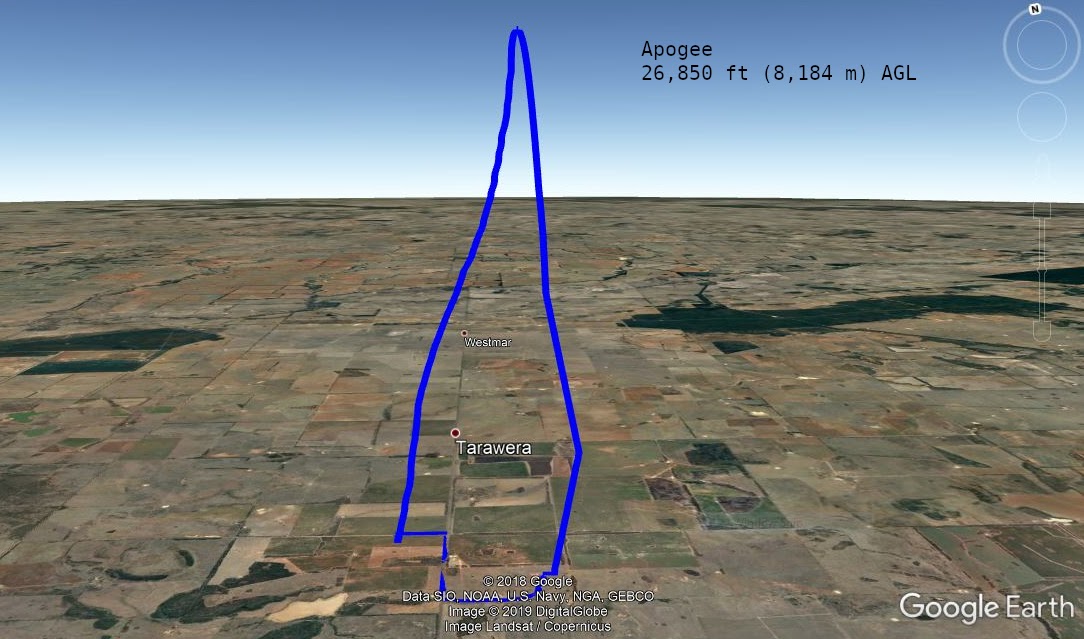 I've still got some video from the flight line as well as next to the pad. I'll end up editing them together into a youtube video and post the results here.

Some high level lessons from the flight.

1) The fly away rail guide worked as hoped. It was damaged in the launch and has a hairline fracture down the "C" side of the FARG. I'll take a photo of that and post it at a later date. I doubt I'll use a FARG again but if I do I will consider them a disposable/single use cost associated with the launch.
2) My drogue ended up a bit tangled. I'm unsure if it was due to my recovery design or just bad luck. I'll keep an eye on this in future flights with this style of recovery.
3) USB-C SUCKS. My TeleDongle was connected to my Pixel 2 via a USB-C OTG cable and it kept falling out as it doesn't really click or lock into place. VERY ANNOYING. I need to pick up a TeleBT.
4) Tip to tip is unnecessary for 54mm MD flights up to Mach 2.7 BUT if you want to keep the fins on for good consider a layer or two of CF t2t. If I had a layer of t2t I doubt I would have popped the fin on landing.
5) My CTI 54mm Tailcone was EAT UP by the L935. I'll post a photo soon but the inside of the base of the tailcone has chunks of the aluminum missing. The black anodizing also showed some discoloration at the base of the tailcone as well. I had flown it with a K300 without issue but I guess the L935 is at the limits of what that component can support.

Here's a video compilation I put together of the various media I had from the flight.

Very interesting data Drew, thanks for sharing. 61Gs is really moving off the pad. At what altitude would it have gone supersonic?
Crop Circles: ... just a bunch of guys looking for their rockets ....
Top

The noise coming off the pad

air.command wrote:Very interesting data Drew, thanks for sharing. 61Gs is really moving off the pad. At what altitude would it have gone supersonic?

Users browsing this forum: No registered users and 0 guests